Cancer Care Planning and Communications Act Introduced in the House

On July 23, the Cancer Care Planning and Communications Act (CCPCA), H.R. 3835, was reintroduced in the House of Representatives. The bill is sponsored by Rep. Mark DeSaulnier (D-CA) and Rep. Buddy Carter (R-GA), co-chairs of the Congressional Cancer Survivors Caucus. The CCPCA is NCCS’ top legislative priority as it would increase access to comprehensive cancer care planning for millions of Medicare beneficiaries. If implemented in Medicare, it is our hope that private insurers would adopt similar measures.

You can find more information about the CCPCA here. NCCS also recently hosted a webinar and created a toolkit about how to meet with your Members of Congress during the August recess and advocate for the CCPCA and other cancer care issues. Check out the webinar and toolkit »

The Department of Health and Human Services (HHS) announced Wednesday an action plan for the “safe importation” of drugs. The plan has two parts. First, HHS would undertake a rulemaking process to establish a system for states and other entities to engage in drug importation from Canada. The second part of the effort would be to establish a pathway at the Food and Drug Administration (FDA) for manufacturers to import versions of drugs that they currently sell in foreign countries. Although many in the cancer community believe importation would not have a major impact on cancer drug access or pricing, the Trump Administration specifically mentions “cancer” in the second part of the plan.

To be clear, this is only the first step in a lengthy process, and NCCS will continue to monitor and report on any further developments.

Last week, the Senate Finance Committee approved a drug pricing bill by a vote of 19 to 9. However, the bill continues to face several serious challenges according to several reports. Republican Senators expressed concerns about the bill. The pharmaceutical industry lobbied aggressively against it on Capitol Hill this week. Democrats pledged that they would agree to floor action on the bill only if there is a vote on protecting pre-existing conditions and a vote on allowing Medicare to negotiate drug prices during consideration of the bill.

Needless to say, the bill’s fate is far from certain. Here is a Washington Post article with additional background and a Kaiser Health News report that focuses on the political challenges facing the package.

To be fair, the challenges rural hospitals and providers face began well before the passage of the Affordable Care Act (ACA). But as this map and the associated research shows, refusing the ACA hasn’t helped matters.

“The irony to me,” said John Henderson, who heads The Texas Organization of Rural & Community Hospitals and supports Medicaid expansion, “is that we’re paying federal income taxes to expand coverage in other states. We’re exporting our coverage and leaving billions of dollars on the table.” 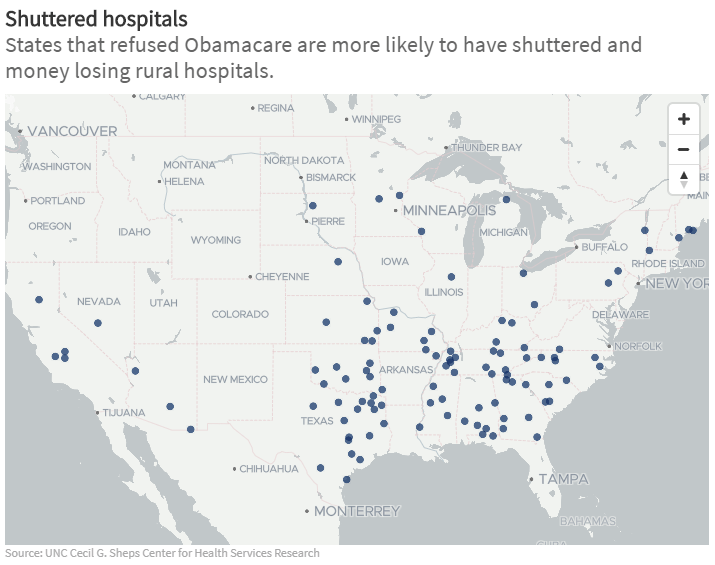 Earlier this week, the Trump administration released a proposed new rule “that would provide consumers far more detail about the actual prices hospitals charge insurers.” There is ongoing debate regarding to what degree patients “shop around” for health care as consumers do for other goods and services. That said, more transparency to give patients—as well as employers and insurers for that matter—more information regarding costs could be a welcome step forward.

This article looks at another drug pricing bill in the Senate, sponsored by Sens. Chris Van Hollen (D-MD) and Rick Scott (R-FL). As Vox.com explains it:

“Their new bill would require companies that have received research funding from the National Institutes of Health and other federal agencies to follow specific pricing restrictions for the drugs they are selling. If they don’t, they’d incur strict penalties.”

The bill only applies to new drugs, and not those currently on the market. With so much focus on this issue in Congress, it will be interesting to see if these and other drug pricing bills gain traction and get voted on.

The author shares her personal experience with cancer and how her journey motivates her, even more than thirty years later, to be a patient advocate.

Study: the US could have averted about 15,600 deaths if every state expanded Medicaid

We often highlight how critically important the Affordable Care Act (ACA) is to cancer patients and their families. This article discusses a recent study that shows the ACA’s impact on mortality more generally, saying:

“[The researchers] found that by the fourth year of Medicaid expansion, mortality rates in states that expanded the program were 0.2 percentage points lower than in states that did not.”

January 12, 2023
As a Triple Negative Breast Cancer survivor, Sharon turned her personal experience into a passion for advocacy and giving back to the community. When she received her diagnosis in May 2015, she remembers being in a state of shock and grief. She said, “You have to allow yourself time to breathe and grieve.”
END_OF_DOCUMENT_TOKEN_TO_BE_REPLACED
https://canceradvocacy.org/wp-content/uploads/Advocate-Spotlight-Sharon-Rivera-Sanchez.jpg 600 1200 NCCS Staff https://canceradvocacy.org/wp-content/uploads/2020/06/NCCA-Logo.png NCCS Staff2023-01-12 15:24:442023-01-12 15:24:44Sharon Rivera-Sanchez: Triple Negative Breast Cancer Survivor Finds Passion in Fitness and Advocacy

December 7, 2022
Alique was first diagnosed with Acute Myeloid Leukemia (AML) at the age of four. Her mother, Michele, knew something was wrong because “the light in her eyes was gone”. After being told by doctors that there was nothing wrong, her family was relentless until new blood work uncovered blast cells.
END_OF_DOCUMENT_TOKEN_TO_BE_REPLACED
https://canceradvocacy.org/wp-content/uploads/Alique-Topalian-Advocate-Spotlight.jpg 600 1200 NCCS Staff https://canceradvocacy.org/wp-content/uploads/2020/06/NCCA-Logo.png NCCS Staff2022-12-07 11:46:562022-12-07 11:48:28Alique Topalian: Childhood Cancer and the Frightening Realities of the Survivorship Journey