The biggest health care news this week was the approval by the House Ways and Means Committee of H.R. 3, the Lower Drug Costs Now Act — Speaker Pelosi's drug pricing bill. The bill advanced along party lines, with opponents citing a recent report from the Congressional Budget Office (CBO) that said the plan would harm drug innovation and reduce the number of new drugs coming to the market. To address this concern, some Democrats are considering investing savings from H.R. 3 into the National Institutes of Health (NIH) to fund drug research. However, pharmaceutical industry lobbyists argue that NIH cannot replace private sector research and development.

The CBO score also showed that the plan would save Medicare $345 billion over the next decade, as a result of a provision that would allow the government to directly negotiate lower drug prices with private companies in Medicare’s Part D drug program. The bill will now head to the full House floor for a vote in the coming weeks. President Trump has not indicated whether he would support the bill, and Paige Winfield Cunningham of the Washington Post reports that Speaker Pelosi and President Trump are still working on a drug pricing deal. She writes, “Were the pair to arrive at any agreement on drug prices, it would be in the face of enormous odds.”

Meanwhile, on the Senate side, Senators Grassley (R-IA) and Wyden (D-OR) have introduced their own drug pricing plan — this one bipartisan. Their legislation would impose an out-of-pocket cap for beneficiaries and cap drug price increases at the rate of inflation. The Grassley-Wyden bill has the support of the President and has been described as “middle ground” by lawmakers. With the government funding deadline coming up in just a few weeks, this fall is sure to be busy in Washington.

Thanks to the financial help that nearly 9 out of 10 HealthCare.gov customers receive, 1 out of 3 marketplace customers will have a plan available in 2020 with a premium of less than $10 per month, according to new data released this week by the Centers for Medicare and Medicaid Services (CMS). The vast majority will have a plan available for less than $100 per month. However, many consumers are not aware their premium costs could be that low.

Get America Covered created a chart outlining a knowledge gap among consumers between what they consider an affordable premium and what they expect coverage to actually cost: 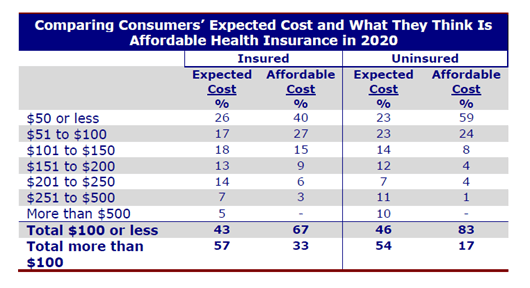 Dr. Joseph Grossman is leading a study where pancreatic cancer cells are grown in lab dishes and are each dosed with different drugs in order to identify personalized treatment options for one of the deadliest cancers.

This article paints a personal picture of a national issue by illustrating the stories of people in neighboring states, one that chose to expand Medicaid and one that did not. A recent University of Michigan study found Medicaid expansion substantially reduced mortality rates from 2014 to 2017.

Even though overall mortality from cancer is falling, the overall incidence is rising. In this opinion piece, Dr. H. Gilbert Welch blames overdiagnosis — the diagnosis of cancers not destined to cause symptoms or death.

Trump Is Trying Hard To Thwart Obamacare. How's That Going?

NPR outlines the five biggest changes made to the ACA during the Trump Administration, including the repeal of the individual mandate and attempts to repeal the entire law. Despite all these efforts, the ACA is still the law of the land and provides critical health coverage to millions of Americans.

May 20, 2022
Last week, NCCS hosted a conversation with cancer control expert and epidemiologist Otis Brawley, MD. NCCS CEO Shelley Fuld Nasso moderated the discussion. “We knew exactly who we wanted to be our first guest speaker in this series. Dr. Otis Brawley is a Bloomberg Distinguished Professor at Johns Hopkins University, an oncologist and an epidemiologist. [...]
END_OF_DOCUMENT_TOKEN_TO_BE_REPLACED
https://canceradvocacy.org/wp-content/uploads/Beyond-the-Checkbox-Crystal-Labbato.jpg 600 1200 NCCS Staff https://canceradvocacy.org/wp-content/uploads/2020/06/NCCA-Logo.png NCCS Staff2022-05-20 13:39:272022-05-20 13:39:27Webinar – Beyond the Checkbox: Delivering Meaningful Cancer Survivorship Care in a Community Setting