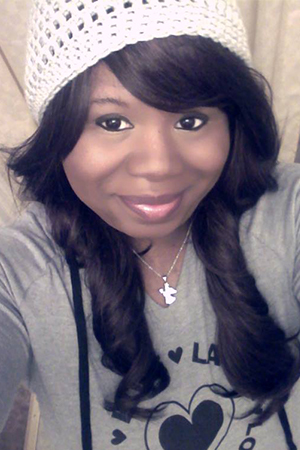 I’d like to share the story of my dear friend, Jennifer Friar Groves, who died earlier this month at the age of 32 from metastatic breast cancer. She gave me her permission to share her story, and in fact, she desperately wanted her story to be shared.

Jennifer was diagnosed with breast cancer in April 2016 at the age of 29. She lived in Booneville, Mississippi, in northern Mississippi near Tupelo. She was too young for regular breast cancer screening, but she found a lump and saw her doctor. She said that she wasn’t taken seriously at first because of her age, but one thing I learned about Jennifer is that she was incredibly persistent and knew how to advocate for herself. She continued to press for answers because the lump was so painful she was having trouble sleeping. She had a 10 cm tumor and was eventually diagnosed with an aggressive, Stage 3B breast cancer.

Soon after her diagnosis, she lost her job because of the time off from work. She did not have insurance at the time. She eventually was approved for Social Security disability benefits and Medicaid, but for the first six months of her cancer treatment, she remained uninsured.

She began chemotherapy and cut her hair before her treatments began. Before cancer, she was known for changing her hair styles, so instead she turned to elaborate head wraps using scarves and even t-shirts, to express her style.

Jennifer was creative in her use of head scarves and loved to share with other cancer patients.

It sucks, but through it all, I smile and remain humble! So many people love me, look up to me, support me and are praying for me, so why give up now? I’ve made it too far to give up now!Jennifer Groves

Chemotherapy was brutal, and she ended up in the hospital with an infection. But the tumor responded well to chemotherapy. In August 2016, she had a left mastectomy. She was in and out of the hospital for two months with a skin infection after her mastectomy.

By October 2016, scans found a spot on her liver, and she learned the cancer had metastasized. She had radiation to the liver and more chemotherapy. She had blood clots in her arm and a pulmonary embolism. 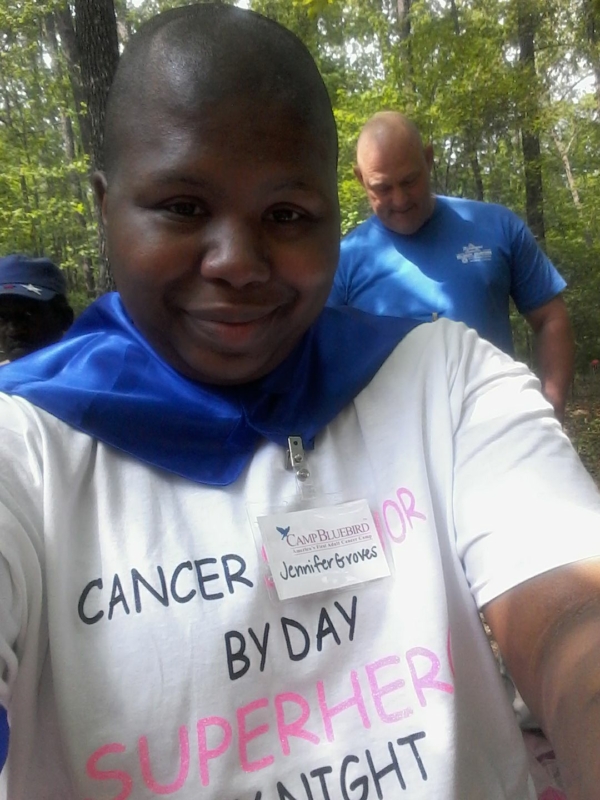 Jennifer attended Camp Bluebird, a getaway for cancer patients and survivors in Alabama.

In 2017, she learned the cancer had spread to her brain. She continued her treatments and became an advocate with several different cancer organizations. She attended Camp Bluebird for cancer survivors in Alabama. She developed a network of other breast cancer survivors and shared her experience on Facebook.

I met Jennifer in April 2018 at the Living Beyond Breast Cancer (LBBC) Conference on Metastatic Breast Cancer in Philadelphia. Jennifer attended the conference and training as part of LBBC’s “Hear My Voice” program, and she recorded an interview, which was used in a video featuring young women with metastatic breast cancer. It was her first time on a plane, and she loved visiting Philadelphia and spending time with other women with metastatic breast cancer.

I was on a panel at the conference discussing public policy advocacy, and Jennifer stood up and shared her positive experience with Medicaid covering her cancer care. She was grateful for Medicaid coverage and the fact that she did not have to fight for coverage of her treatments, like so many people with commercial insurance. 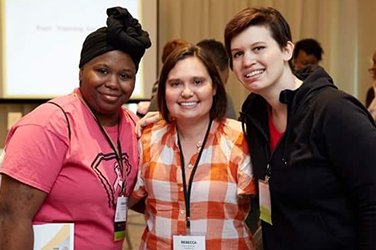 Jennifer at the April 2018 LBBC Conference on Metastatic Breast Cancer.

I spoke with her afterward, thanked her for sharing about Medicaid, and asked if she would be willing to share her experience in other settings as well.

NCCS spent most of 2017 fighting efforts to repeal the Affordable Care Act (ACA). While most of the attention was on protecting people with pre-existing conditions, we were also concerned with protecting Medicaid, as some versions of the repeal legislation would have gutted Medicaid, and not just the Medicaid expansion that was part of the ACA. Thus, we were always looking for cancer patients and survivors who would share their Medicaid experience with policymakers and the media, so that we could highlight the vital role Medicaid plays for so many cancer patients. Jennifer and I exchanged emails, and our friendship began. 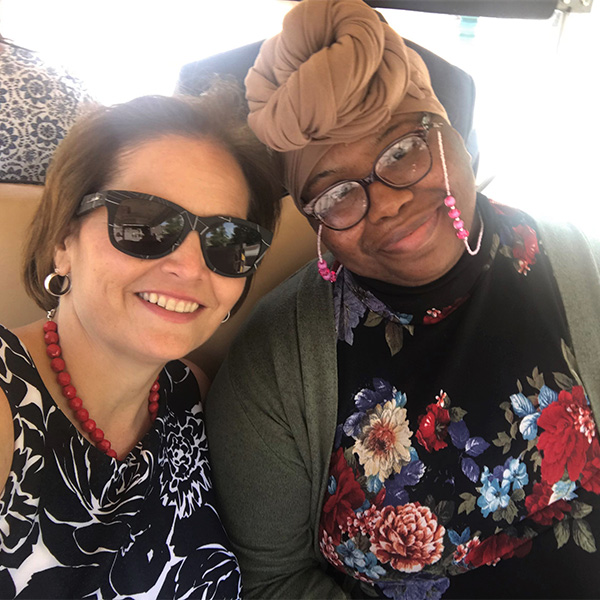 In her first email to me, she wrote:

“I now want to be more vocal and help everyone – not just breast cancer but all cancers. I’ve just had a good experience with receiving everything I needed! I just really wish it was like that for everyone else. I would love to work with you in every way possible to speak about Medicaid, my experience and just help others. Be that voice, be that advocate for everyone, be that leader. I’ve already made a few appointments with my city mayor and alderman. I’m working on getting a meeting with Mississippi senator and governor.”

She went on to create a Facebook group for Medicaid and All Cancers, and she joined NCCS’ Cancer Policy & Advocacy Team (CPAT). She received a scholarship to attend the CPAT Symposium in June and made plans to come to Washington, DC. You see, despite everything she was going through, she always wanted to advocate for others and help people less fortunate than her. 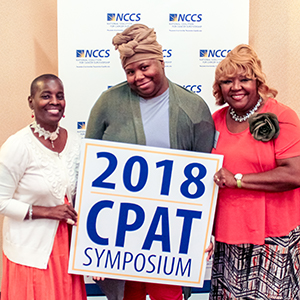 Jennifer at the 2018 CPAT Symposium with fellow advocates Yvonne Florence and Loretta Herring.

In June 2018, a week before her trip to DC, she posted a video on Facebook of her hula hooping at a Relay for Life event in Mississippi. Then suddenly, she began to lose mobility as the tumor in her brain grew. She fell in her apartment, hit her head, and was hospitalized.

Yet, she was still determined to come to Washington, meet her Senator, learn about policy issues, network with other advocates, and share her story. Traveling alone was difficult for her, but she used her advocacy skills, polite manners, and Southern charm to enlist airport, flight, and hotel staff to help her get from point A to point B. While she did not like to ask for help, she was willing to do so in order to get what she needed.

While in DC, she met with Senator Roger Wicker of Mississippi, and his supportive and friendly staff members gave us a tour of the Capitol. She loved meeting other advocates, and she gave tutorials to other cancer survivors on how to create their own head wraps. Before she flew home to Mississippi, I gave her a driving tour of some of the Washington, DC—highlights. She wanted to see the White House, and we got as close as we could by car, since she was not able to walk far. She did manage to walk to see the Martin Luther King, Jr. Memorial near the Tidal Basin. 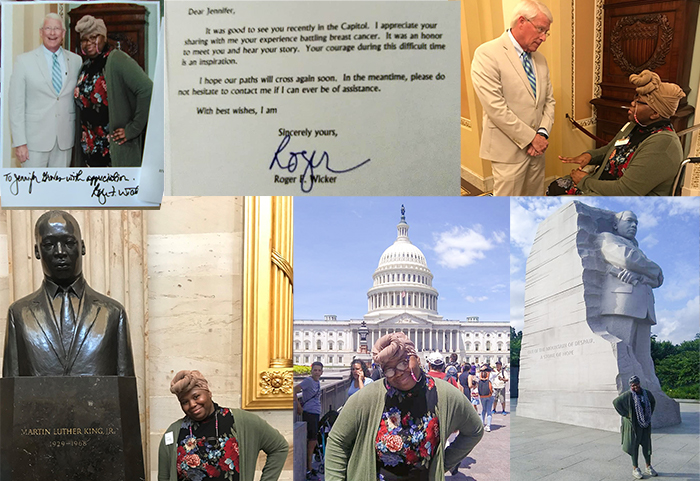 Jennifer’s June 2018 trip to Washington, DC, and her meeting with Senator Roger Wicker.

When she returned to Mississippi, she had several more falls, was hospitalized again, had physical therapy to try to improve her mobility, and considered the possibility of surgery to remove her brain tumor. 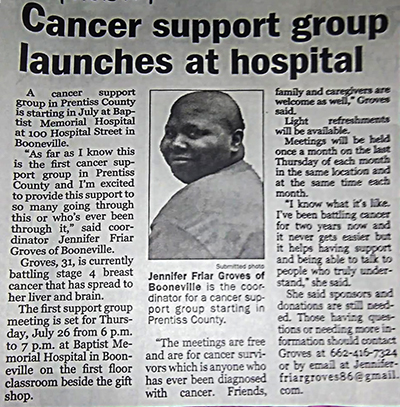 Despite her own hardships, she continued to focus on how she could help others. She created a cancer support group in her hometown, with the first meeting at the end of July. After the meeting, she shared with me the difficulties other people were facing and her resolve to help them as much as she could.

In August, I visited Jennifer in Mississippi, and we spent the weekend going out for dinner, a movie, and a pedicure (her first!); giving ourselves facials; and hanging out and talking. Soon thereafter, she made the difficult decision to enter hospice care. With hospice care, she finally got the support that she needed—support that I believe could have helped her much earlier in her cancer treatment.

Jennifer faced so many barriers during her cancer experience. As a young woman, she felt like people did not take her disabilities as seriously as they should because they were not used to a young woman being as sick as she was or needing as much help as she did. Additionally, it was very difficult for Jennifer to ask for help, because she wanted to maintain her independence. Transportation was a challenge, and she relied on Medicaid to provide transportation to her appointments that were an hour, or in the case of Jackson, three hours, from her home. While she was incredibly grateful for her Medicaid and disability benefits, they did not cover all her expenses, adding to the burden of living with cancer.

Through it all, Jennifer remained grateful, positive, and determined. She was a dear friend to me, and I miss her terribly. I learned from her about grace, strength, friendship, and love. 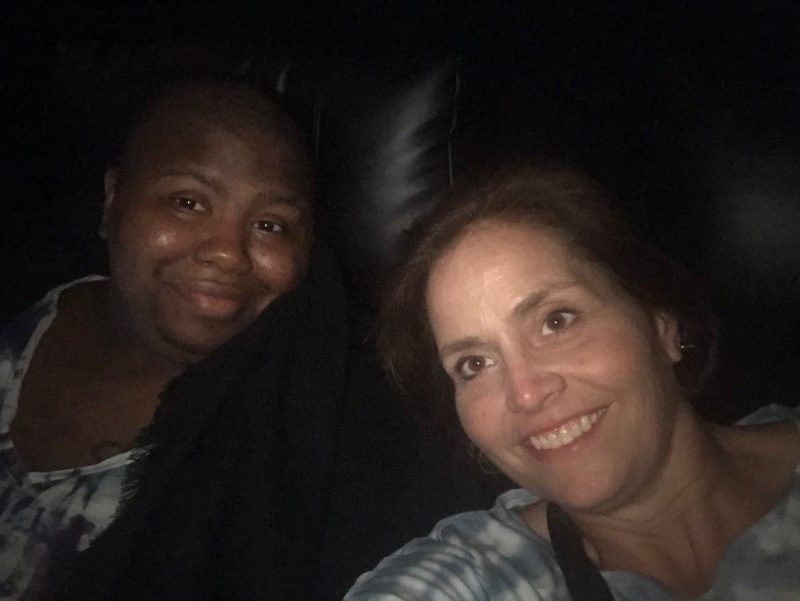 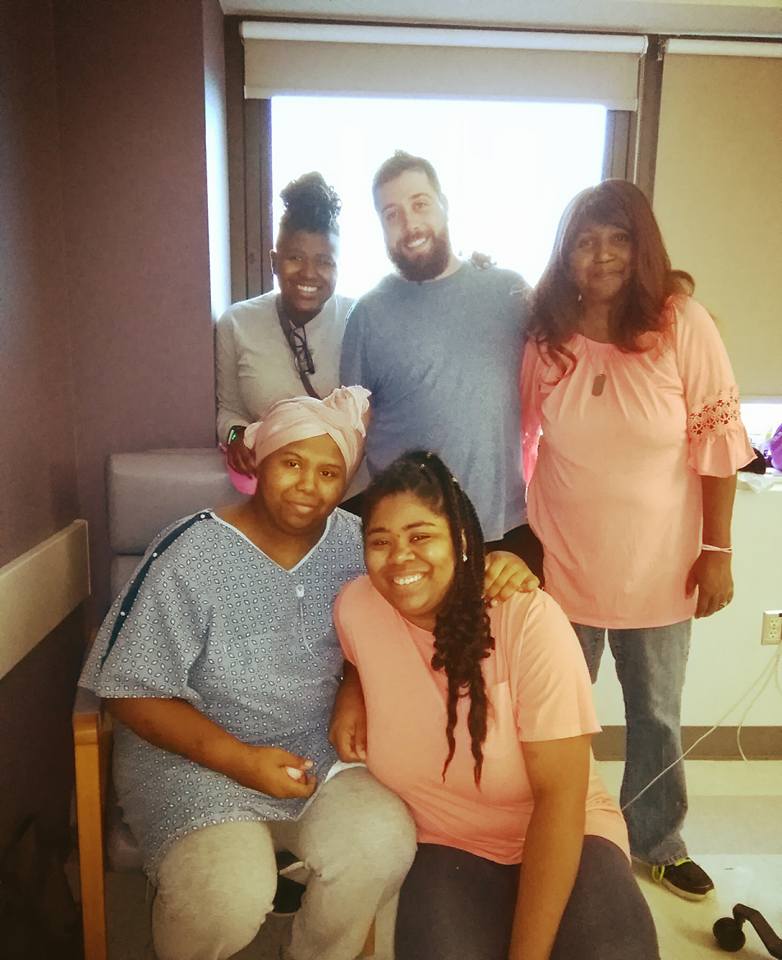 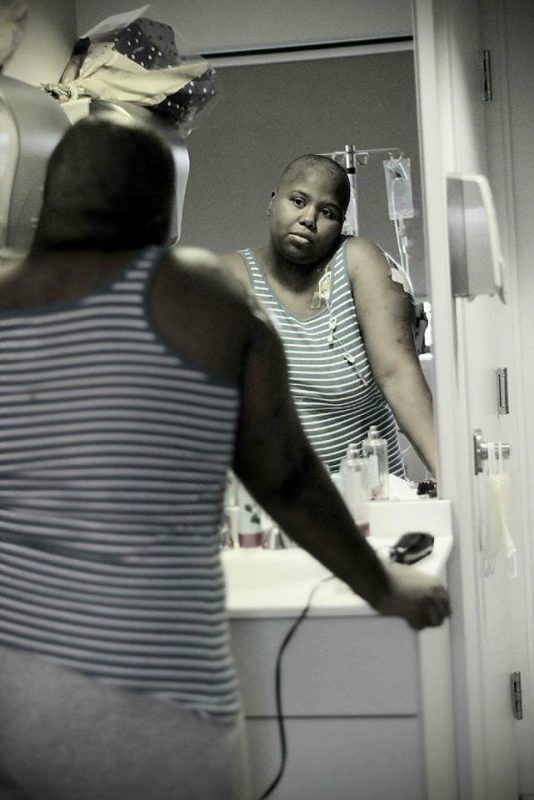 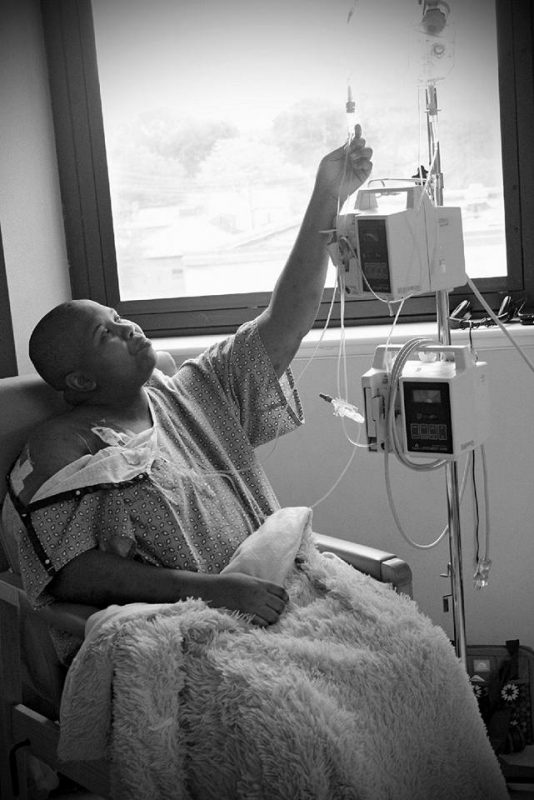 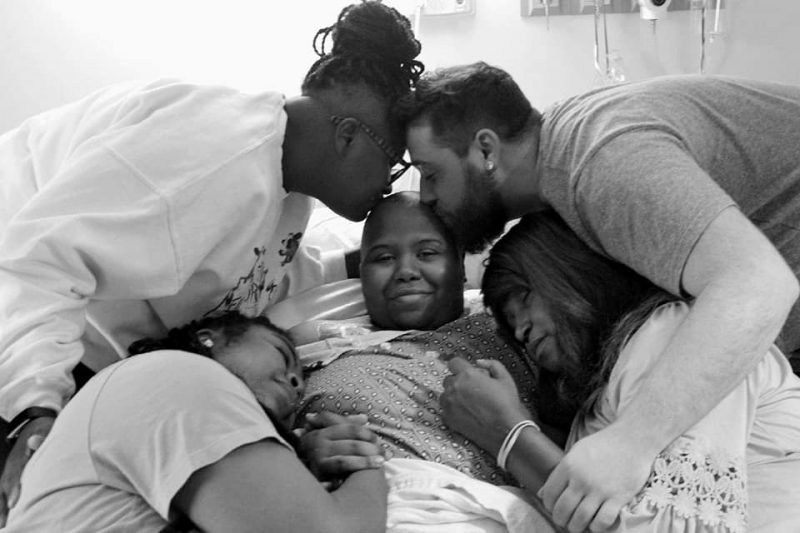 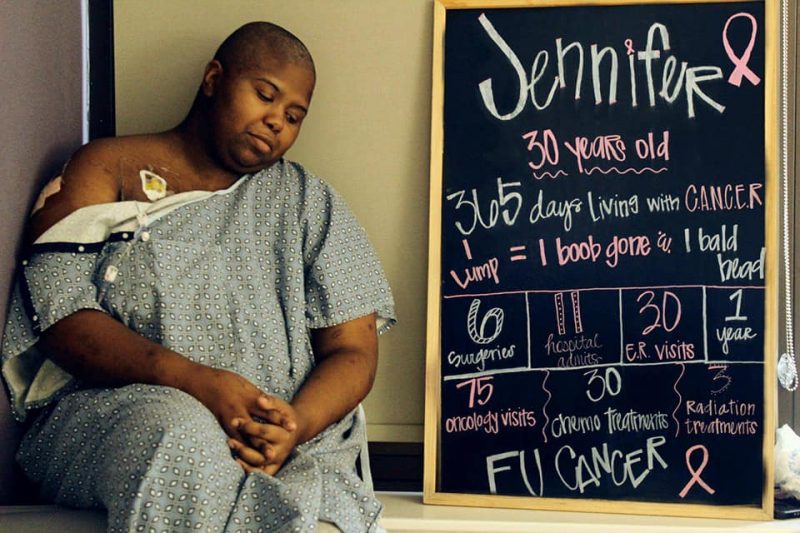 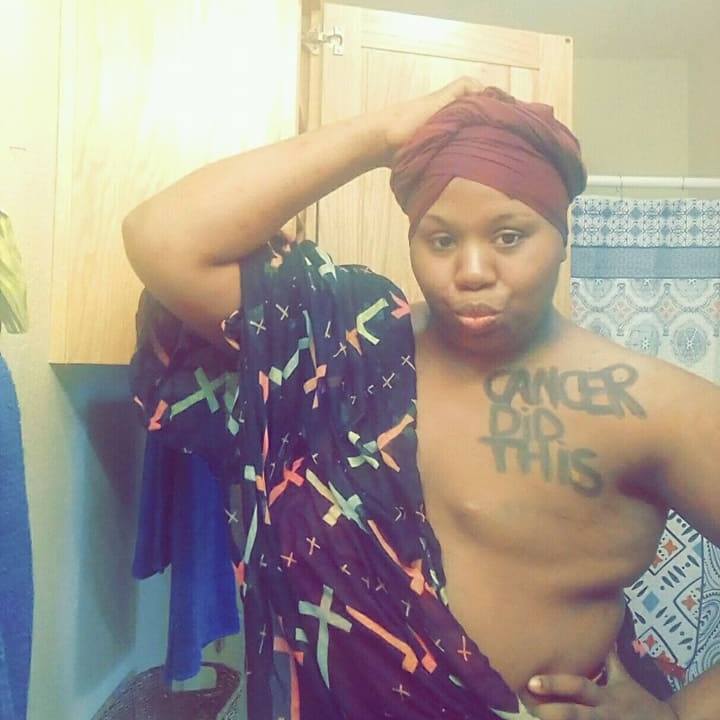 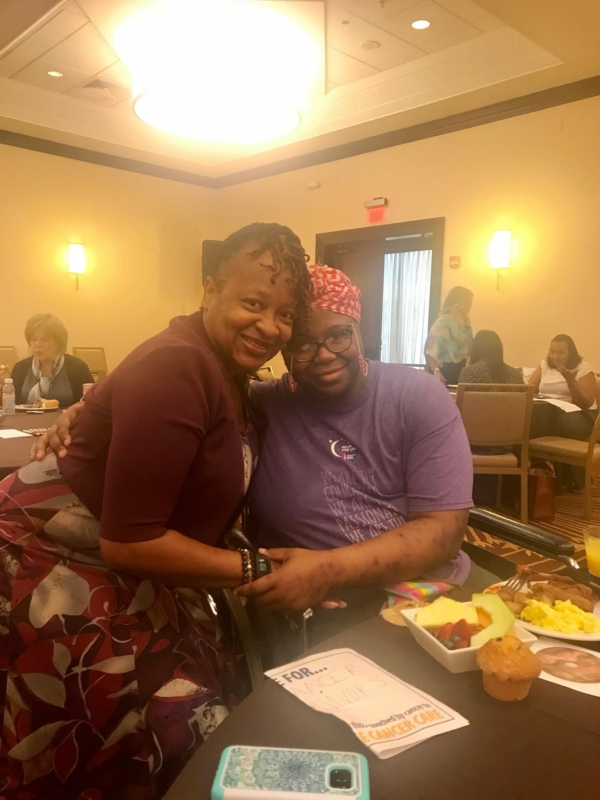 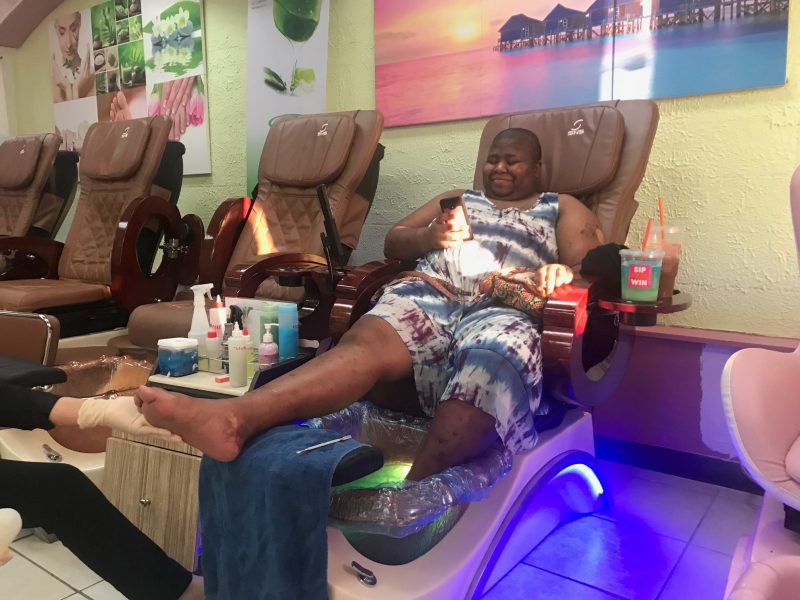 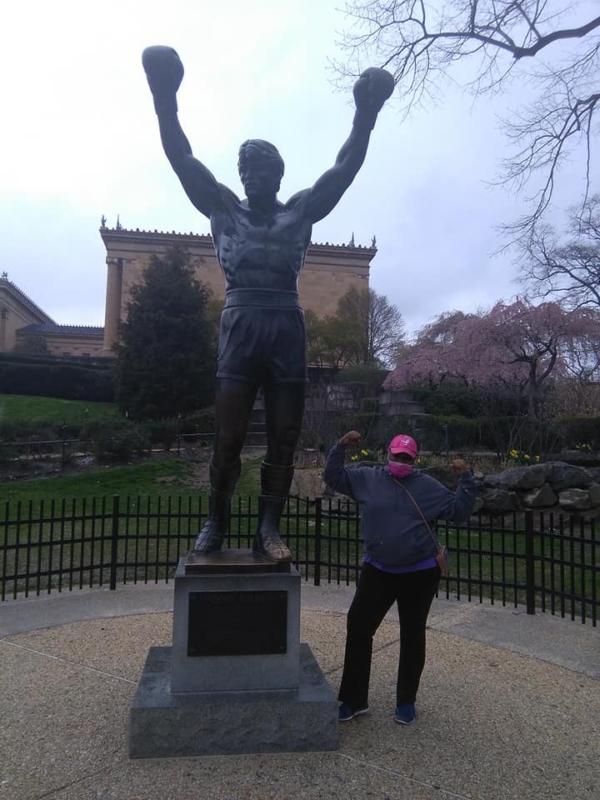 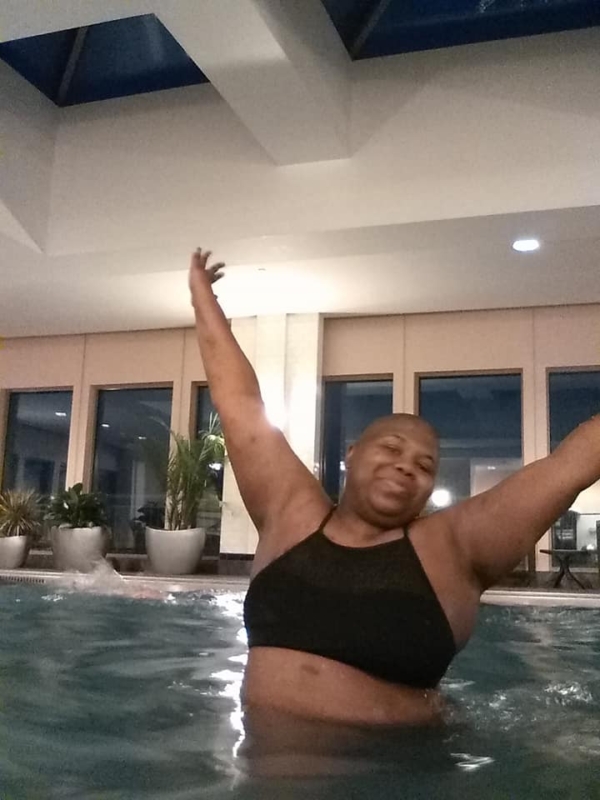 NCCS Letter to CMS Highlights Concerns About Proposed Medicare Part B Refor...
Scroll to top
Get Updates From NCCS