This week, the US Census Bureau released health insurance coverage estimates for 2017. Between 2016 and 2017, the overall uninsured rate did not change significantly, but 14 states experienced an increase in the number of uninsured individuals, due to poverty status or whether the state expanded Medicaid.

While coverage numbers dropped in many states, the Trump Administration continues to cut ACA navigator funding, which helps individuals sign up for health coverage on the ACA exchanges. This year, only 39 organizations received grants for navigators to help individuals enroll in ACA plans, leaving many consumers on their own to navigate and complete the complex enrollment process.

This number is down significantly from last year and many are saying this is yet another attempt to weaken the ACA. ACA Navigators assist people with enrolling in health insurance coverage through the exchanges. One major concern with the lack of navigation surrounds newly implemented short-term, limited duration plans that skirt the ACA’s patient protections and coverage standards and are therefore known as “junk plans.”

A lawsuit filed by 20 attorneys general from conservative states to dismantle the ACA is awaiting a ruling in Texas. In response, Maryland Attorney General Brian Frosh filed a lawsuit yesterday “seeking a declaratory judgment in U.S. District Court of Maryland that the ACA is indeed constitutional and the Trump administration must stop trying to ‘sabotage’ the Obama-era Affordable Care Act.”

And just today, "a coalition of patient advocates and other healthcare groups is going to court to try to block the Trump administration from expanding the availability of short-term health plans that don’t offer a full set of benefits."

It remains to be seen how any of these lawsuits move forward, but the politics of the ACA continue to play a central role eight years after it was passed.

High Prices, Broken Promises: What should be done about the high cost of prescription drugs? 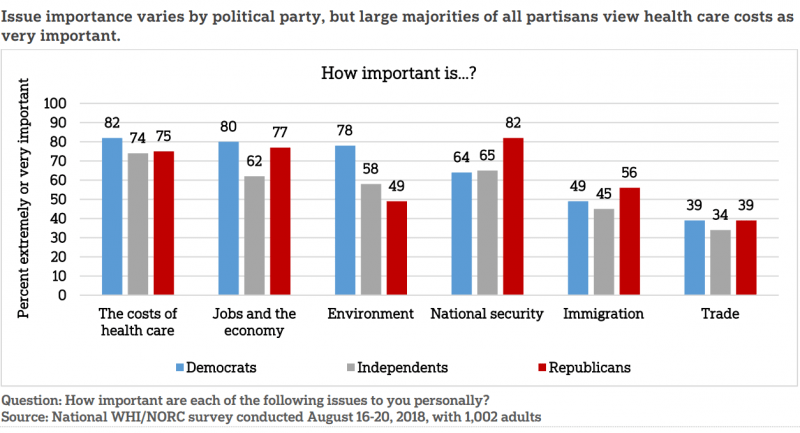 A new poll from West Health, conducted by NORC at the University of Chicago, says that 77% of Americans say drug prices are “unreasonable,” and Americans rank health care costs among the most important issues. Read the full report »

As hurricane Florence makes its way up the East Coast, the National Cancer Institute outlines resources that are helpful in preparing cancer patients in the face of catastrophic events. Resources include tips for patients and caregivers on developing a plan in case of an emergency and information on how to link patients with their doctors during a natural disaster.

Are We Being Misled About Precision Medicine?

At the most recent meeting of the American Society of Clinical Oncology, researchers presented four precision-medicine studies. Two were total failures. The others weren’t much better, failing to shrink tumors 92 percent and 95 percent of the time. The studies received almost no news coverage.

Many of the doctors I interview as a health care reporter are uncomfortable talking about patients who don’t survive. They pivot to talking about people they’ve saved. They rush past the disappointing present and fast-forward to a future in which every patient gets the treatment she or he needs. If you don’t listen carefully, you could easily be led to believe those future cures are already here.

Submitting comments and letters to federal agencies is an important civic duty that allows citizens to weigh in on federal rules and regulations.

Hundreds of comments were submitted to the Centers for Medicare and Medicaid Services by patients and organizations regarding the 340B program, a drug discount program that many hospitals rely on to provide certain drugs and services. Kaiser Health News reviewed those responses and made the startling discovery that some individuals were not aware their names were used to submit comments opposing the 340B program. This is a concerning development, which will almost certainly result in additional scrutiny.

Back in June, Arkansas imposed work requirements for Medicaid beneficiaries in the state. This week, Governor Hutchinson announced that 4,353 people were dropped from receiving health care through Medicaid due to the new work requirement policy.

Kevin De Liban, an attorney for Legal Aid of Arkansas, said that 90% of individuals enrolled in Arkansas Medicaid expansion are actively employed or have qualified for an exemption. He said those losing their health care because of this new policy are being hurt primarily because of “administrative hoops that trip people up.” It should be noted that the website used for people to submit their information closes each night from 9:00pm until 7:00am.

May 20, 2022
Last week, NCCS hosted a conversation with cancer control expert and epidemiologist Otis Brawley, MD. NCCS CEO Shelley Fuld Nasso moderated the discussion. “We knew exactly who we wanted to be our first guest speaker in this series. Dr. Otis Brawley is a Bloomberg Distinguished Professor at Johns Hopkins University, an oncologist and an epidemiologist. [...]
END_OF_DOCUMENT_TOKEN_TO_BE_REPLACED
https://canceradvocacy.org/wp-content/uploads/Beyond-the-Checkbox-Crystal-Labbato.jpg 600 1200 NCCS Staff https://canceradvocacy.org/wp-content/uploads/2020/06/NCCA-Logo.png NCCS Staff2022-05-20 13:39:272022-05-20 13:39:27Webinar – Beyond the Checkbox: Delivering Meaningful Cancer Survivorship Care in a Community Setting

NCCS Raises Concerns Over Impact on Patients of Medicare Physician Fee Schedule...
Scroll to top
Get Updates From NCCS