A lawsuit filed by 20 attorneys general from conservative leaning states saw its day in court this week. Earlier this summer, these attorneys general brought forth a lawsuit claiming that the Affordable Care Act (ACA) is unconstitutional because the individual mandate was repealed by Congress last year.  With the Trump administration taking the very unusual step of declining to protect a federal law passed by Congress, several democratic attorneys general stepped in to argue that repealing the individual mandate does not invalidate the entire law.

Oral arguments were heard Wednesday by Judge Reed O’Connor, who sounded openly opposed to the ACA. The Judge’s questioning gave the impression that he is skeptical of the ACA’s standing without the individual mandate. He gave no indication of when he will make a decision, but either way, there will almost certainly be an appeal and the case could go all the way to the Supreme Court.

Meanwhile, confirmation hearings for Supreme Court nominee, Judge Brett Kavanaugh, are underway. Judge Kavanaugh has not provided any insights into his views on the ACA during the hearings, but if he is confirmed he could be a deciding factor on the future of the ACA.

The ACA’s Pre-Existing Condition Protections Remain Popular with the Public, including Republicans, As Legal Challenge Looms This Week 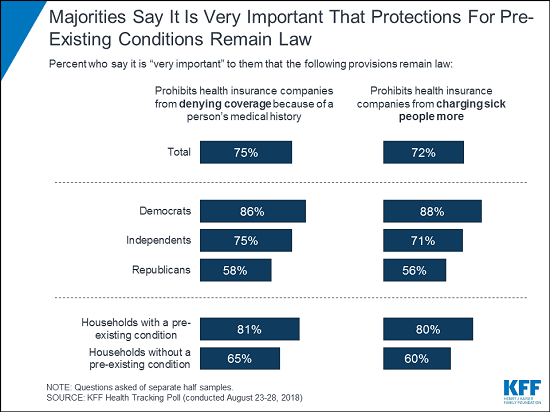 One of the pieces of legislation is a draft bill that bans private insurers and drug middlemen called pharmacy benefit managers from inserting "gag clauses" into contracts with pharmacists. The clause prohibits the pharmacist from telling a consumer it is cheaper to pay for a drug out of pocket rather than through insurance.

It looks as though bipartisan support for such legislation is growing in Congress and could continue to move ahead. The Senate this week unanimously passed a similar 'gag clause' bill targeting Medicare Part D insurers. That bill now awaits action in the House.

She’s worn both a hospital gown and a white coat. Now she wants to change how doctors perceive their patients

This is the inspiring story of Shekinah Elmore. Two weeks after finishing treatment for her third stint with cancer, she began medical school. Based on her experiences as both a patient and a doctor, she’s trying to help change the doctor-patient relationship:

Elmore wanted her peers to recognize that not every person who looks well is well. Her classmates began to draw imaginary lines between themselves, the “healthy,” and their future patients, the “sick.” Elmore herself was proof that those categories aren’t so clear cut. Later, she’d realize how much their use hurts patients.

A study called “Closer: A Videoconference Intervention for Distance Caregivers,” research funded by the National Institute of Nursing Research, aims to discern the extent to which using technologies can help distance caregivers connect with their loved ones in meaningful ways. This includes virtually attending visits to be a part of the treatment decision making process.

“Distance caregivers, compared to local caregivers, have higher stress, feel less support, have higher anxiety and more burden,” Dr. Douglas said. “It’s a group that hasn’t been well recognized. We haven’t really done a really good job up until this point in terms of trying to provide services that in some way make being a distance caregiver less stressful and more meaningful.”

May 20, 2022
Last week, NCCS hosted a conversation with cancer control expert and epidemiologist Otis Brawley, MD. NCCS CEO Shelley Fuld Nasso moderated the discussion. “We knew exactly who we wanted to be our first guest speaker in this series. Dr. Otis Brawley is a Bloomberg Distinguished Professor at Johns Hopkins University, an oncologist and an epidemiologist. [...]
END_OF_DOCUMENT_TOKEN_TO_BE_REPLACED
https://canceradvocacy.org/wp-content/uploads/Beyond-the-Checkbox-Crystal-Labbato.jpg 600 1200 NCCS Staff https://canceradvocacy.org/wp-content/uploads/2020/06/NCCA-Logo.png NCCS Staff2022-05-20 13:39:272022-05-20 13:39:27Webinar – Beyond the Checkbox: Delivering Meaningful Cancer Survivorship Care in a Community Setting