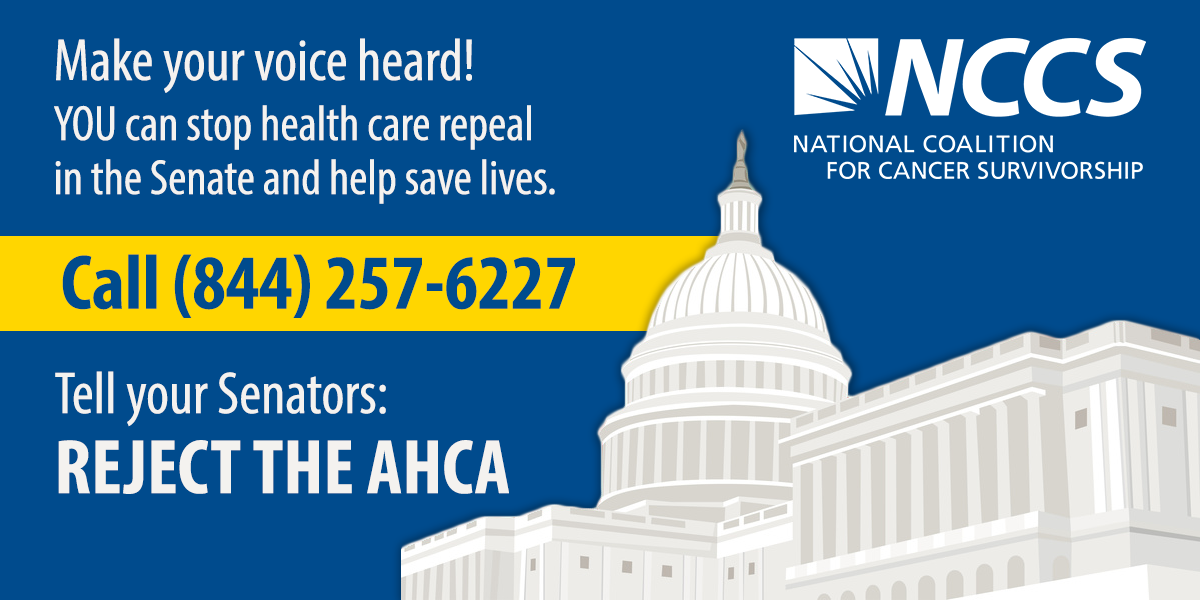 If you haven’t already called your Senators’ offices to tell them to reject the AHCA, now is the time. If you have called, thank you! And keep calling. If you have friends or family in Alaska, Arizona, Colorado, Iowa, Ohio, Maine, Nevada, Tennessee, and West Virginia, please urge them to call. Senators from these states are crucial votes and need to hear from their constituents. Senate leadership set a goal of July 4th recess to bring the bill to the floor and access to health care for millions of cancer survivors across the U.S. is at stake.Call 844-257-6227 to be connected to your Senators today.

#ACA update: Some GOP Senate offices told us this week that they are now open to the big #medicaid cuts in AHCA. https://t.co/klp0L1vcuf

As we reported last week, moderate Republicans in the Senate seem to be caving on their earlier promises to reject any bill that slashes Medicaid funding. Senators Collins and Capito have reportedly stated they would consider a “phasing out” of the Medicaid expansion program.

However, lengthening the timeframe for ending the program does nothing to help the millions of people who depend on Medicaid for health insurance, including low-income, disabled, and elderly Americans. Because the Senate can only lose two votes on the AHCA, each Senator is critical and it is extremely concerning to hear moderate members negotiate away their constituents’ access to health care.

To increase confusion around the American Health Care Act (AHCA), President Trump this week changed his analysis of the House passed bill from being “incredibly well-crafted” to now being, “Mean, mean, mean,” as the Senate considers the legislation. Earlier this year, Trump said his health care replacement would be “great” and “would cover everyone.” The AHCA is a far cry from providing coverage for everyone. In fact, it would take health insurance away from millions and cause costs to go up for our most vulnerable communities.

Adding to the growing list of negative analyses of the AHCA, the following reports and estimates were released this week:

Not only is the AHCA a bad bill, it’s also extremely unpopular with the public. The New York Times reported this week on their analysis of each states’ perception of the bill and found that not a single state favors the AHCA.

The question is, will Republican senators vote yes on a bill this harmful and this unpopular?

November 1, 2022
Amanda Helms was enjoying a bubble bath while reading a book when she looked down and noticed a lump on the side of her breast in January…
END_OF_DOCUMENT_TOKEN_TO_BE_REPLACED
https://canceradvocacy.org/wp-content/uploads/Amanda-Helms-Advocate-Spotlight-webmc.jpg 600 1200 NCCS Staff https://canceradvocacy.org/wp-content/uploads/2020/06/NCCA-Logo.png NCCS Staff2022-11-01 13:57:522022-11-10 15:01:05Amanda Helms: Care Planning, Mental Health, and Palliative Care are Essential to Quality Cancer Care

What Caught Our Eye: AHCA Would Cause 50% Rise of Uninsured Children, Crowdfunding...