Prior to the Affordable Care Act (ACA), cancer survivors were at the mercy of the health care system, often forced to pay exorbitant premiums or simply denied coverage altogether. Today, America’s 16 million cancer survivors benefit from the ACA’s patient protections that are critical to providing them with quality, affordable, and accessible health care coverage. NCCS is actively engaged in advocating to ensure this unprecedented access for cancer patients and providers continues.
Yesterday, after weeks of working on their health care repeal bill in secret with no hearings, Senate Republicans released a “discussion draft” of their Better Care Reconciliation Act of 2016 (BCRA). After the House passed their bill (called the AHCA), Senators like Lamar Alexander, R-Tenn., chairman of the Health, Education, Labor and Pensions Committee, said “The Senate will review the House bill but will write its own version over the next few weeks.”

Despite such statements, the Senate version is very similar to the House and is actually worse than we thought. Sarah Kliff at Vox.com sums it up:

The bill asks low- and middle-income Americans to spend significantly more for less coverage. The bill would roll back the Affordable Care Act’s expansion of the Medicaid program, which currently covers millions of low-income Americans, and include additional cuts to Medicaid. It would rework the individual market so that enrollees get less financial help to purchase less generous health insurance with higher deductibles.

Updated: added a new section to our Senate plan explainer on how the bill lets states waive out of EHB requirements.https://t.co/Y8J6nKJho2

Furthermore, the bill significantly threatens anyone with a pre-existing condition, by allowing states to waive Essential Health Benefit (EHB) requirements. As Tim Jost at Health Affairs Blog points out:

Individuals with preexisting conditions would be able to get coverage, but they could be denied coverage for the pharmaceuticals or services that they would need for treatment of their preexisting conditions. Waivers of EHB could also affect large employer plans, which are only prohibited from imposing annual and lifetime limits on EHB and only required to cap out-of-pocket expenditures for EHB.

Basically, yes, people with pre-existing conditions won’t be denied the ability to purchase health insurance. HOWEVER, that insurance might not cover any treatments or medicines they need. Without requirements for benefits to be covered, insurers will offer skimpy plans that won’t meet the needs of cancer survivors. Premiums will rise for more generous plans that people with pre-existing conditions need. Note: waiving EHB also returns annual and lifetime limit caps for millions of people.

Finally, what BCRA does to Medicaid, which millions of children and low-income, disabled, and elderly Americans rely on for health care is cruel. Per Sarah Kliff again:

The Senate bill begins to phase out the Medicaid expansion in 2021 — and cuts the rest of the program’s budget too. The Senate bill would end the Affordable Care Act’s expansion of Medicaid to millions of low-income Americans. This program has provided coverage to more Americans than the private marketplaces. It would also cut the rest of the public insurance program. [BCRA] would also limit government spending on the rest of the Medicaid program, giving states a set amount to spend per person rather than the insurance program’s currently open-ended funding commitment.

Please call (844) 257-6227 TODAY and tell your Senators NO on the health care bill. Even if you’ve called before, please call again.

Call EVERY DAY until the Senate votes.

Senators in Alaska, Arizona, Colorado, Iowa, Louisiana, Maine, Nevada, Ohio, Tennessee, and West Virginia are crucial votes. Please share this message with friends and family members who live in these states, and ask them to call (844) 257-6227. 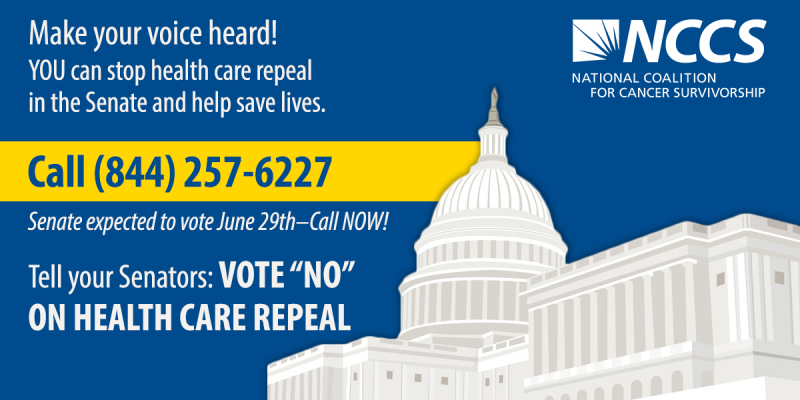 May 20, 2022
Last week, NCCS hosted a conversation with cancer control expert and epidemiologist Otis Brawley, MD. NCCS CEO Shelley Fuld Nasso moderated the discussion. “We knew exactly who we wanted to be our first guest speaker in this series. Dr. Otis Brawley is a Bloomberg Distinguished Professor at Johns Hopkins University, an oncologist and an epidemiologist. [...]
END_OF_DOCUMENT_TOKEN_TO_BE_REPLACED
https://canceradvocacy.org/wp-content/uploads/Beyond-the-Checkbox-Crystal-Labbato.jpg 600 1200 NCCS Staff https://canceradvocacy.org/wp-content/uploads/2020/06/NCCA-Logo.png NCCS Staff2022-05-20 13:39:272022-05-20 13:39:27Webinar – Beyond the Checkbox: Delivering Meaningful Cancer Survivorship Care in a Community Setting