The National Coalition for Cancer Survivorship (NCCS) joined with 120 leading patient, provider and consumer organizations to express grave concerns about potential Senate actions on Medicaid. Together, the groups implored Senate leadership to protect the Medicaid program and oppose efforts to roll back Medicaid expansion or change Medicaid’s funding in a way that would harm patients and consumers.

In a letter to both Senate Majority Leader Mitch McConnell and Chairman of the Senate Finance Committee Orrin Hatch, the 120 organizations urged the Senators to:

Proposals to phase out Medicaid expansion and impose per capita caps, like those included in the American Health Care Act, would limit patients’ access to care and threaten Medicaid’s ability to provide critical coverage to the tens of millions of patients who rely on the program to get the care they need to live healthy, full lives.

Read the full text of the letter below and complete list of signing organizations. 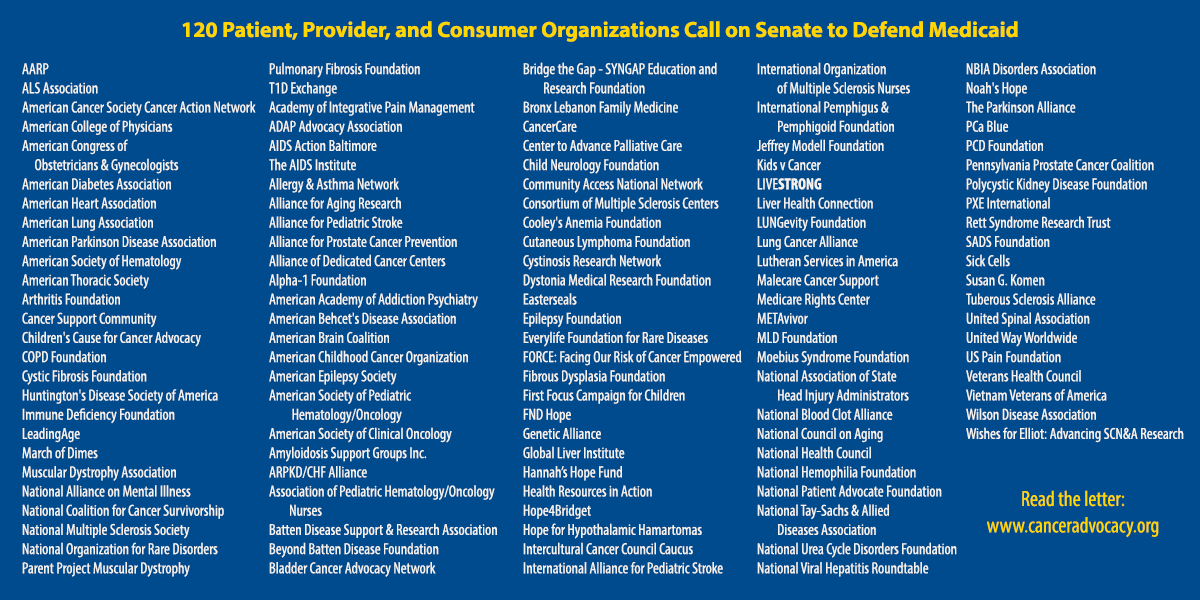 May 20, 2022
Last week, NCCS hosted a conversation with cancer control expert and epidemiologist Otis Brawley, MD. NCCS CEO Shelley Fuld Nasso moderated the discussion. “We knew exactly who we wanted to be our first guest speaker in this series. Dr. Otis Brawley is a Bloomberg Distinguished Professor at Johns Hopkins University, an oncologist and an epidemiologist. [...]
END_OF_DOCUMENT_TOKEN_TO_BE_REPLACED
https://canceradvocacy.org/wp-content/uploads/Beyond-the-Checkbox-Crystal-Labbato.jpg 600 1200 NCCS Staff https://canceradvocacy.org/wp-content/uploads/2020/06/NCCA-Logo.png NCCS Staff2022-05-20 13:39:272022-05-20 13:39:27Webinar – Beyond the Checkbox: Delivering Meaningful Cancer Survivorship Care in a Community Setting

What Caught Our Eye: AHCA Would Cause 50% Rise of Uninsured Children, Crowdfunding...
Scroll to top
Get Updates From NCCS