Prior to the Affordable Care Act (ACA), cancer survivors were at the mercy of the health care system, often forced to pay exorbitant premiums or simply denied coverage altogether. Today, America’s 16 million cancer survivors benefit from the ACA’s patient protections that are critical to providing them with quality, affordable, and accessible health care coverage. NCCS is actively engaged in advocating to ensure this unprecedented access for cancer patients and providers continues.
The Senate has returned from Memorial Day recess, turning its attention to health care reform and setting an ambitious schedule for consideration of its version of a health care bill. The Senate plans to get their version to the Congressional Budget Office to have the bill scored, then are planning to vote on the bill very soon. Some are pushing for a vote by the July 4 recess, while others say the August recess is the target.

There have been several key developments in the past week, starting with Republican leadership sharing a bill of the Senate’s version of the AHCA at a caucus luncheon on Tuesday. The public has yet to see the language being considered, as there have been no public hearings or input from experts in the health care or patient advocacy space. NCCS understands the bill will likely be quite similar to the House version.

As we continued to meet with Senate offices this week, we were alarmed by the comments made by some Senators and their staff members, who said that they could potentially be persuaded to vote for a bill that made the phasing out of the Medicaid expansion a smooth transition. This strays from their initial reaction to the AHCA, when a group of Senators wrote a letter to leadership stating, “We are concerned that the proposal from the House of Representatives does not provide stability and certainty for individuals and families in Medicaid expansion programs or the necessary flexibility for states.”

Thirty-four states and the District of Columbia have expanded Medicaid, leading to coverage for more than 11 million people who otherwise would not have insurance. Medicaid expansion, which was seen as a deal breaker for a handful of Senators just a week ago, is now being viewed by the moderates as collateral damage in the debate around health care. Some have talked about a “glide path” for unwinding the Medicaid expansion, but adding two years to the phase-out period still results in the same outcome.

What You Can Do 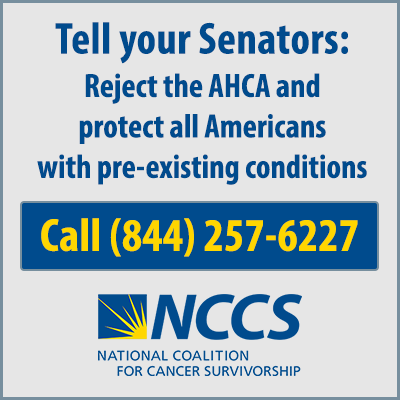 Even with these changes, the bill still has a narrow margin to pass in the Senate. Your voice is incredibly important in this process and now is a key time to make your voice heard.

Call 844-257-6227 and let your Senators know the AHCA or anything resembling the bill would be devastating for cancer survivors.

We will not be duped by false promises to protect pre-existing conditions developed in secrecy.

May 20, 2022
Last week, NCCS hosted a conversation with cancer control expert and epidemiologist Otis Brawley, MD. NCCS CEO Shelley Fuld Nasso moderated the discussion. “We knew exactly who we wanted to be our first guest speaker in this series. Dr. Otis Brawley is a Bloomberg Distinguished Professor at Johns Hopkins University, an oncologist and an epidemiologist. [...]
END_OF_DOCUMENT_TOKEN_TO_BE_REPLACED
https://canceradvocacy.org/wp-content/uploads/Beyond-the-Checkbox-Crystal-Labbato.jpg 600 1200 NCCS Staff https://canceradvocacy.org/wp-content/uploads/2020/06/NCCA-Logo.png NCCS Staff2022-05-20 13:39:272022-05-20 13:39:27Webinar – Beyond the Checkbox: Delivering Meaningful Cancer Survivorship Care in a Community Setting