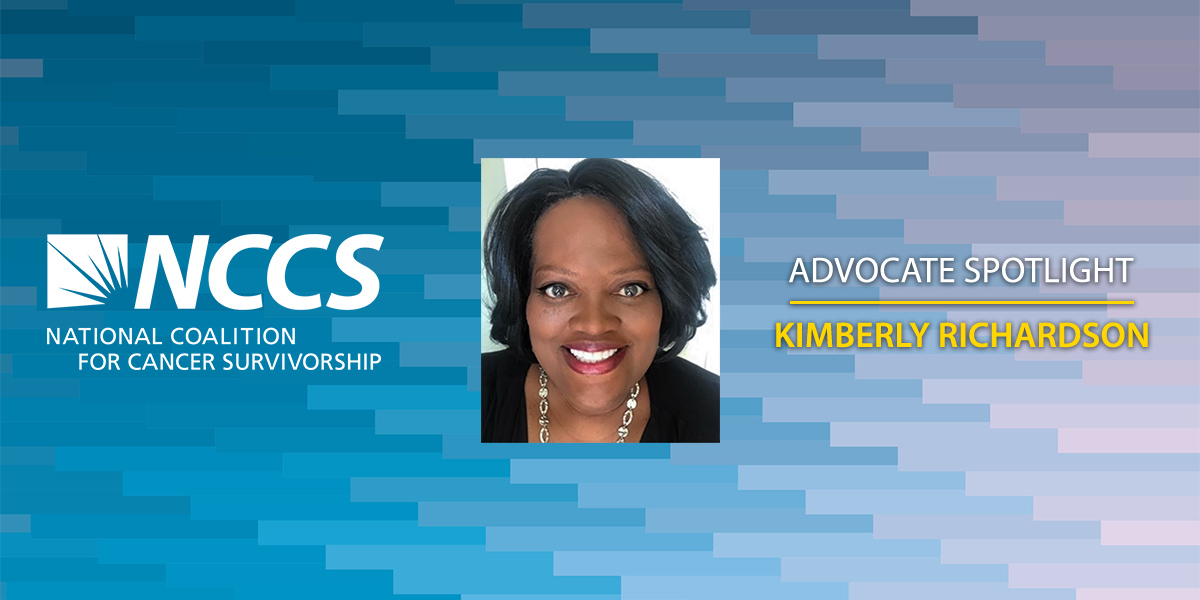 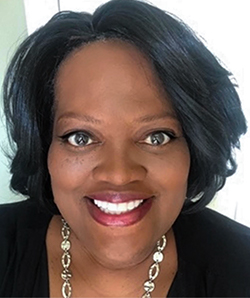 As lifelong Chicagoan Kimberly Richardson trained for the 2013 Chicago Marathon, the unusual lethargy she felt drove her into her doctor’s office. Diagnosed with an ovarian cyst she was scheduled for a routine surgery to remove it.

She woke from the surgery to a tap on her shoulder, “Kim, it’s cancer. We’ll talk through it when you are fully awake.”

Just 50 years old, with no family history of ovarian cancer, Richardson was diagnosed with a rare type called Granulosa Cell Tumor, Stage 3A. She recalls the late nights looking on the Internet at 2 a.m. for information about her rare cancer, but there wasn’t much. “I would read about ovarian cancer, and it seemed like maybe I had five years to live.”

In her follow appointment from the surgery, she was told by the physician’s assistant that it looked like they got it all and she would not have to do chemo. “The relief I felt at that moment unfortunately only lasted 10 minutes,” she says.

“The oncologist comes in and starts talking to me about a chemo plan. And I’m like wait, what? Is anyone talking to anybody before they talk to me? It seems like I’m getting disjointed information.”

As a self-described Type-A personality who was an avid runner, a mom, an adjunct professor and the executive director of a nonprofit, Richardson was used to taking charge, making decisions and being an active leader.

“I thought I was coming to this treatment plan as if it was going to be shared decision-making,” she told The Health Design Podcast in May of 2020. “Instead, I was just told to do things. When I did ask my oncologist questions about my treatment, she would get defensive. She said straight to me, ‘Do you want to live? Do what I tell you.’ So, we had a very tumultuous relationship throughout my entire treatment. It was awful.”

Reflecting back on her treatment several years later she realizes, “I had such a traumatic treatment plan and experience with my oncologist that it’s the thing that has propelled me toward advocacy.”

In her advocacy work Richardson applied for the National Coalition for Cancer Survivorship’s (NCCS) Elevating Survivorship Program (Elevate), a patient and advocate led initiative to raise awareness about survivors’ unique needs and strategies to improve care at the local level.

As an NCCS Elevate Ambassador she partnered with University of Illinois College of Medicine students to launch an educational program for scientists and cancer survivors called, “Survivors Advising Scientists Educational Program” (SASEP).

The mission of SASEP is to create a bidirectional educational platform that connects young investigators with cancer patients, survivors, research advocates and allies to increase scientific literacy and engagement across the community.

“Patients and caregivers don’t really understand the science behind cancer. I created SASEP, enlisting the help of the MD/PhD students from the University of Illinois Cancer Center (UICC) and various cancer patient advocates nationwide to develop training modules to educate on the basics of scientific inquiry,” says Richardson.

“Our goal is to bring everyone to the table for discussions related to the science of cancer and their therapies,” said Benjamin Gordon, a MD/PhD student who worked on the program with Richardson. “As an MD/PhD student studying breast cancer, I have felt that there was disconnect between my thesis project and the interpersonal aspects of medicine. Through SASEP, I have had the opportunity to share my research findings and methodologies and learn from an inspiring group of research advocates nationwide.”

In April of 2021, Richardson and the UICC team won “Best Poster in the area of Cancer Prevention and Control” at the UICC Gary Kruh Research Day. It was a meaningful validation and recognition of the hard work they’ve put in and a testament to the impact of the SASEP. 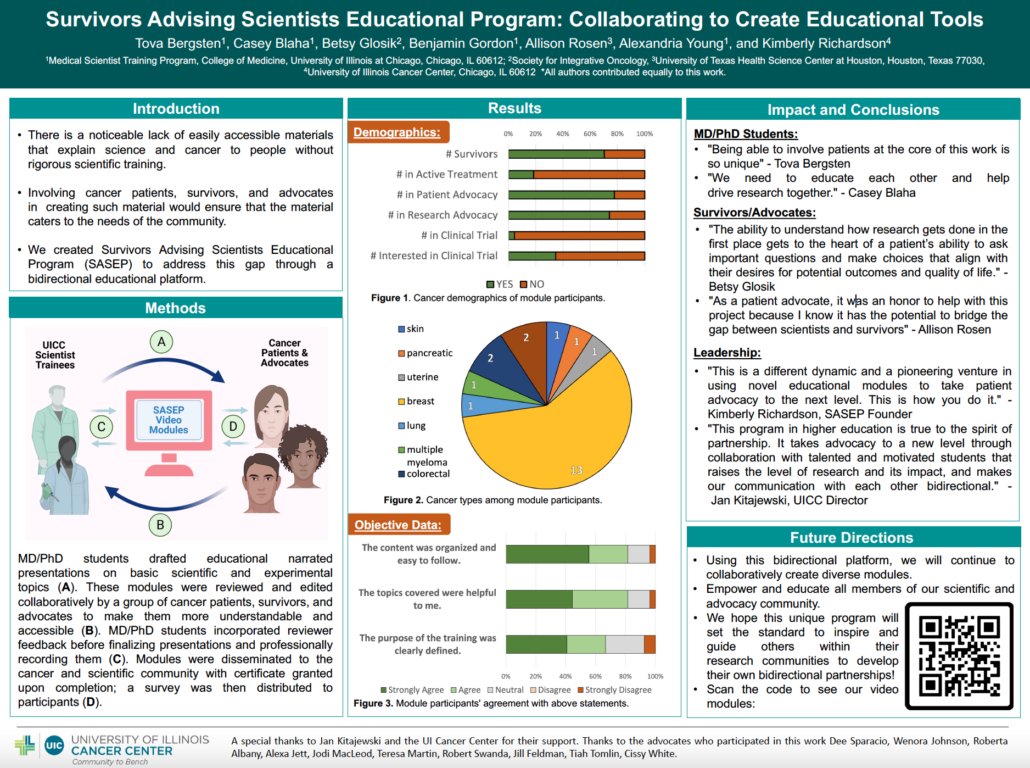 “The award shows that researchers and patients/advocates can collaborate to make posters together,” says UICC MD/PhD scientist trainee Tova Bergsten. “Posters are very common in the scientific community, but it’s very uncommon to work with patients on a poster. Hopefully that can start to change now that we’ve not only achieved an effective collaboration, but an award winning one!”

According to fellow UICC MD/PhD student Casey Blaha, “We hope that survivors can see this poster and take the spirit of collaboration it represents into their own lives to inspire similar efforts bringing together researchers and patients. We also hope that it helps decrease the barriers to engaging with poster sessions at future scientific events and inspires survivors to engage with the scientific community.”

Currently, the SASEP team advocate on Capitol Hill, and at medical conferences and webinars with the medical and patient advocacy communities on how to use their modules to create bidirectional conversations that increase understanding of the science behind patients’ treatments.

“The work behind SASEP, and our poster, is meant to help bridge the gap between patients and scientists, to make sure we can all communicate and learn from each other effectively,” says Bergsten.

And that is exactly what Richardson hoped to accomplish when she was inspired to advocacy after her own traumatic treatment experience. As for the ultimate goal behind her advocacy work, Richardson says, “I don’t want to see another woman at 2 o’clock in the morning trying to find information about her cancer. That’s unacceptable.”

Read more about the SASEP on the UICC website »

NCCS Applauds the Supreme Court Decision Dismissing the Challenge to the AC...
Scroll to top