This week, the House of Representatives voted to formally intervene in Texas v. United States, the lawsuit seeking to invalidate the Affordable Care Act (ACA). With support from three Republican members, it passed by a vote of 235-192. The resolution now heads to the Senate where Republican leaders will likely not bring it up for a vote.

This vote follows passage of last week’s provision authorizing the House legal counsel to defend the law. The case was filed last year, when 20 Republican Attorneys General filed a lawsuit challenging the constitutionality of the ACA, arguing that because the individual coverage mandate was essentially eliminated by Congress in the Tax Cuts and Job Reform Act, the rest of the law cannot stand on its own. Read NCCS' official statement on the matter »

In addition, drug pricing dominated the news this week. Early in the new year, Health Affairs reviewed prescription drug policy in 2018 and analyzed what to expect in 2019. On January 1, drug makers raised the price of more than 250 medications by an average of 6.3 percent. Yesterday, Sen. Bernie Sanders (VT) and Rep. Elijah Cummings (MD-7) introduced legislation aimed at reducing drug prices. The legislative package included several provisions, including tying U.S. median drug prices to those in several other countries and allowing the HHS Secretary to negotiate Medicare Part D prices.

Cancer in America Is Way Down, For the Wealthy Anyway

On Tuesday, the American Cancer Society released its annual Cancer Facts and Figures. Good news made headlines that cancer deaths have been dropping since the early 1990s, as much as 27 percent between 1991 and 2016. However, the report also notes, “Although the racial gap in cancer mortality is slowly narrowing, socioeconomic inequalities are widening, with the most notable gaps for the most preventable cancers.” Read More » 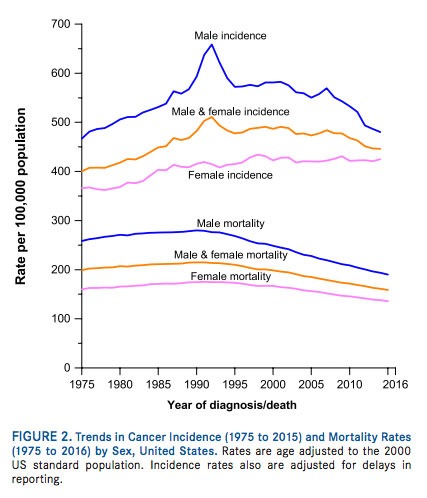 Referring to a study published in the Journal of the American Medical Association, this article highlights the increase of annual spending on direct-to-consumer marketing of healthcare. “Drug makers and other healthcare companies spent almost $30 billion in a single year to influence the medical choices made by Americans and steer them toward treatments that were newer, vastly more expensive and sometimes risker than their tried-and-true alternatives, new research shows.”

Colorectal Cancer is Killing More 20-to 30-year olds. We have no clue about why.

“It’s one of the mysteries that has puzzled cancer epidemiologists: Why are younger and younger people becoming sick with colorectal cancer?”

Bristol-Myers Squibb (BMS) Co. purchased Celgene Corp. in a deal worth $74 billion. BMS noted the acquisition will strengthen its cancer and inflammatory disease drug product. This continues the recent trend of mergers in the biopharmaceutical industry. It remains to be seen if and how these mergers will impact patients and their access to new and effective drugs.

January 12, 2023
As a Triple Negative Breast Cancer survivor, Sharon turned her personal experience into a passion for advocacy and giving back to the community. When she received her diagnosis in May 2015, she remembers being in a state of shock and grief. She said, “You have to allow yourself time to breathe and grieve.”
END_OF_DOCUMENT_TOKEN_TO_BE_REPLACED
https://canceradvocacy.org/wp-content/uploads/Advocate-Spotlight-Sharon-Rivera-Sanchez.jpg 600 1200 NCCS Staff https://canceradvocacy.org/wp-content/uploads/2020/06/NCCA-Logo.png NCCS Staff2023-01-12 15:24:442023-01-12 15:24:44Sharon Rivera-Sanchez: Triple Negative Breast Cancer Survivor Finds Passion in Fitness and Advocacy

December 7, 2022
Alique was first diagnosed with Acute Myeloid Leukemia (AML) at the age of four. Her mother, Michele, knew something was wrong because “the light in her eyes was gone”. After being told by doctors that there was nothing wrong, her family was relentless until new blood work uncovered blast cells.
END_OF_DOCUMENT_TOKEN_TO_BE_REPLACED
https://canceradvocacy.org/wp-content/uploads/Alique-Topalian-Advocate-Spotlight.jpg 600 1200 NCCS Staff https://canceradvocacy.org/wp-content/uploads/2020/06/NCCA-Logo.png NCCS Staff2022-12-07 11:46:562022-12-07 11:48:28Alique Topalian: Childhood Cancer and the Frightening Realities of the Survivorship Journey

NCCS Webinar Video: “The Outlook for Health Care in the New Congress&...
Scroll to top
Download the Survey Report