In order to bring you the latest cancer-related health care policy and news, we at NCCS are combining our ACA Updates and What Caught Our Eye (WCOE) content into a weekly email and blog post. We aim to make this a concise, one-stop summary of what you need to know as we continue working together to make cancer care better for everyone.

On Friday, May 11, 2018, President Trump announced a drug pricing blueprint to address prescription drug prices. Initial media coverage of the plan suggested that the blueprint failed to honor the President’s campaign commitment to negotiation of drug prices. Overall, the press and policymaker reaction to the plan was muted, with some suggesting that the plan would have limited impact. Although details of the plan are still unclear, certain elements of the plan may have an impact on how cancer patients receive and pay for their prescription drugs. There may be changes in the coverage and payment for both intravenous, physician-administered cancer drugs and oral, self-administered cancer therapies. The public has 60 days to comment on the drug pricing plan through the “Request for Information” released by the Trump Administration. NCCS will evaluate the direct patient impact of the plan provisions that relate to coverage and payment for cancer drugs and will outline the issues of concern to cancer patients.

Insurance Premium Increases for 2019, the Causes, and Efforts to Lower Them

Insurers have begun to project next year’s premiums for plans offered through the Affordable Care Act (ACA) marketplaces. The premiums that have been announced to date for 2019 are significant increases over premiums in 2018. Insurance companies signaled that adjustments to the premiums are possible if they receive relief from the costs associated with insuring expensive patients. Members of Congress are blaming each other for the premium increases. Congressional Democrats contend that the actions of the Trump Administration to undermine the ACA enrollment process and to advance short-term, limited-duration plans will further undermine the ACA marketplaces. The Trump Administration and some Congressional Republicans maintain that the ACA is fundamentally flawed and that repeal is still necessary. The Hill has reported that rate increases have reignited the “Obamacare war.” In fact, Senator Lindsay Graham is reportedly working on a “new” Obamacare repeal bill.

Short-Term Plans: Enrollment will be Significant and Negative Effects on Marketplace will be Substantial

The Trump Administration’s proposed expansion of short-term plans will reportedly be finalized by June 2018. These plans, sometimes called “skinny” or even “junk” plans, will not be required to meet ACA standards for benefits, cost-sharing, guaranteed issue, and pre-existing condition protections. The Administration has touted these plans as an affordable insurance option for healthy adults and has suggested that uptake of the plans will be slow and the impact on the ACA health insurance marketplaces will be modest.

This week, the Actuary of the Centers for Medicare & Medicaid Services (CMS), who is independent from the CMS leadership,  projected that 1.8 million Americans would elect short-term coverage, with 800,000 coming from the ACA marketplace. This projection means that almost 2 million Americans will have only short-term coverage of limited scope and significant cost-sharing burden and that the diversion of hundreds of thousands from the marketplace will destabilize the ACA marketplace. For cancer patients who rely on ACA coverage, premiums will increase, potentially substantially, if they are not eligible for premium subsidies. The expansion of short-term plans will also cost the federal government $38.7 billion over ten years with increased expenditures for premium subsidies, the CMS Actuary reported. 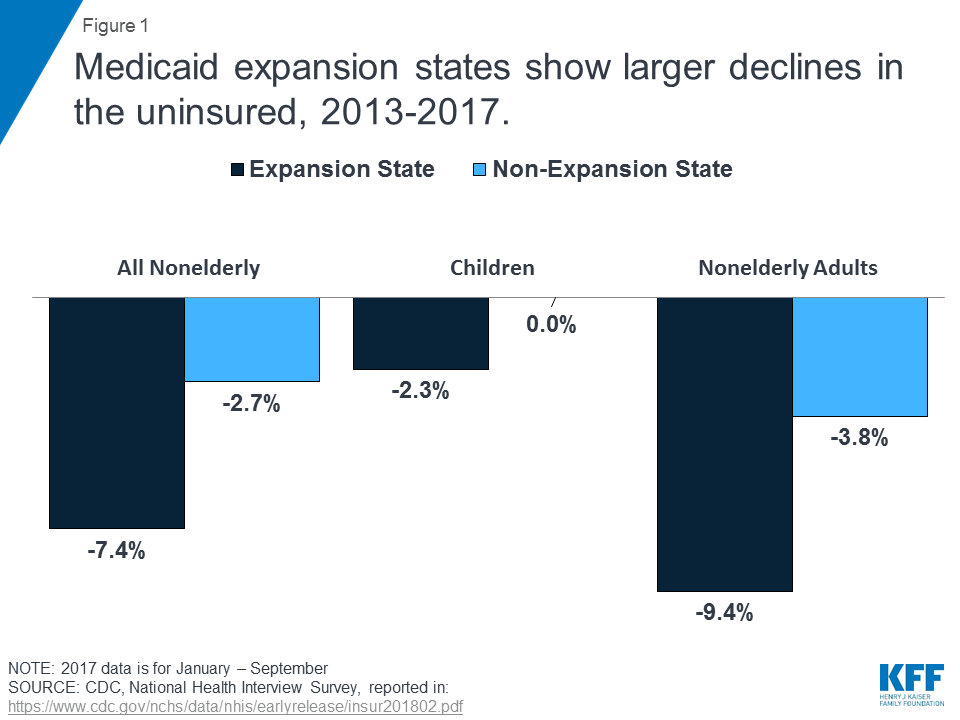 A Kaiser Family Foundation report entitled, “Implications of the ACA Medicaid Expansion: A Look at the Data and Evidence,” reported that “Medicaid expansion states experienced significant coverage gains and reductions in uninsured rates compared to non-expansion states for the low-income population broadly.”

The Urban Institute, a think tank in Washington, DC, has acknowledged the deep divide about the ACA and the renewed push to repeal the ACA. They have proposed an alternative that protects employer-based insurance and Medicare and creates a new system for individual and families seeking health insurance coverage. Premiums in the system would be income-based and premium subsidies would be available for those who need them. The plan would also impose limits on provider payments and other cost controls would be implemented to control premium costs. The Urban Institute plan includes a chart that compares a wide range of health care reform proposals, identifying the strengths and weaknesses of each.

In a study published in the Journal of the American Medical Association (JAMA), researchers reported that men with low-risk prostate cancer are increasingly choosing active surveillance of their disease instead of surgery and radiation. The study, which included more than 125,000 men with prostate cancer treated between 2005 and 2015, found a major shift in treatment decisions over that decade. In 2005, only 27 percent of men under age 65 chose watchful waiting instead of active treatment. By 2015, that proportion had grown to 72 percent. Cancer care experts are applauding the shift in treatment choices, which spares men the serious side effects of treatment and results in comparable outcomes.

The Centers for Medicare & Medicaid Services (CMS) has initiated a review of how and under what terms the Medicare program will cover the recently approved CAR T-cell therapies. These therapies have provided significant benefits to certain leukemia and lymphoma patients.  Some patients experience serious side effects from the treatments.  Public comment on the review is accepted until June 15, 2018.  A public meeting will be held on August 22, 2018.  The final decision is due on February 16, 2019.

May 20, 2022
Last week, NCCS hosted a conversation with cancer control expert and epidemiologist Otis Brawley, MD. NCCS CEO Shelley Fuld Nasso moderated the discussion. “We knew exactly who we wanted to be our first guest speaker in this series. Dr. Otis Brawley is a Bloomberg Distinguished Professor at Johns Hopkins University, an oncologist and an epidemiologist. [...]
END_OF_DOCUMENT_TOKEN_TO_BE_REPLACED
https://canceradvocacy.org/wp-content/uploads/Beyond-the-Checkbox-Crystal-Labbato.jpg 600 1200 NCCS Staff https://canceradvocacy.org/wp-content/uploads/2020/06/NCCA-Logo.png NCCS Staff2022-05-20 13:39:272022-05-20 13:39:27Webinar – Beyond the Checkbox: Delivering Meaningful Cancer Survivorship Care in a Community Setting

NCCS Joins Cancer Leadership Council to Oppose Right to Try Legislation in the...
Scroll to top
Get Updates From NCCS