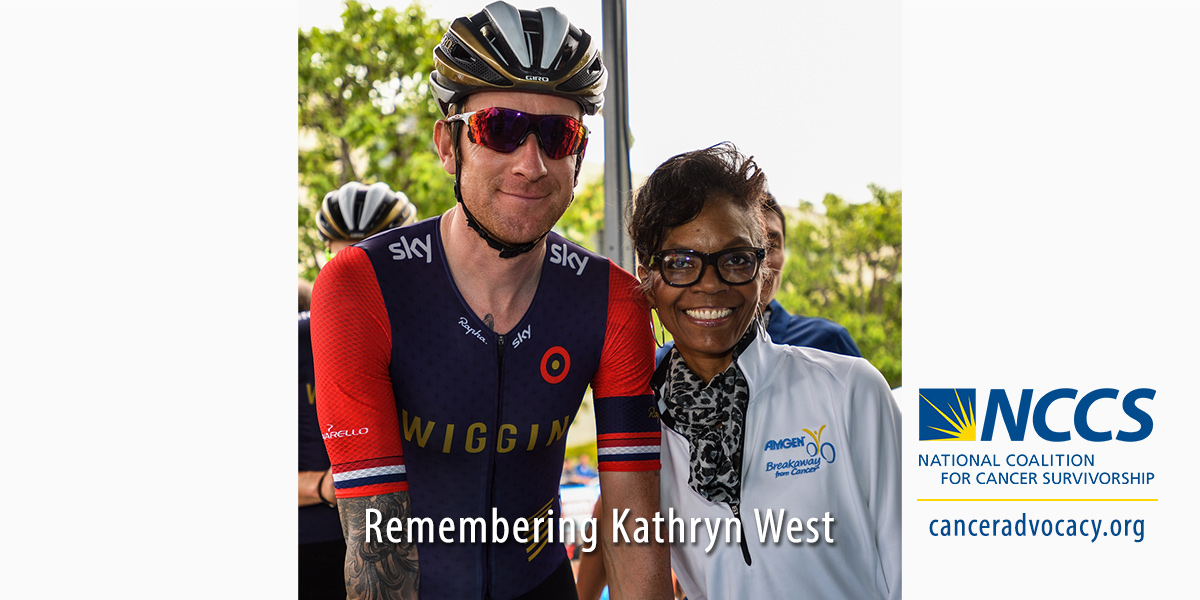 NCCS first met Kathryn through her role as Advocacy Director for Amgen. Her vision to increase awareness of resources for people affected by cancer led her to champion the creation of Amgen’s Breakaway from Cancer®. Breakaway shares cancer patient resources for the entire cancer experience, from prevention through survivorship, as an integral part of Amgen’s Tour of California. NCCS has been a proud partner in this effort since the Tour’s inception in 2005.

Kathryn’s instincts in her advocacy role were driven by her career as an oncology nurse and her understanding that the effects of cancer go far beyond just the physical. Kathryn combined that knowledge with her determination and collaborative spirit to evolve Breakaway from an exhibit at the first Amgen Tour of California, to four strong partners covering the continuum of the cancer experience during the Tour and throughout the year. To help raise awareness further, Kathryn engaged celebrity spokespeople, including Patrick Dempsey, Joan Lunden, and Katherine Kelly Lang, who each truly understood the devastating effects a cancer diagnosis has on an individual and his or her loved ones.

Over the years, many of the NCCS staff attended Breakaway from Cancer® events. We, our fellow advocacy partners, and the Breakaway staff were like family on the road for 10 days traveling throughout California. Many of us got to know Kathryn well during our time together, and her cancer diagnosis was a shock to us all.

To no one’s surprise, she brought the same strength and resilience as an advocate to her own cancer experience. She continued to lead by example, bringing the struggles of cancer to the forefront by being brutally honest about fears, side effects, and setbacks of her cancer. Her stories always had an element of humor, but it was hard to watch our Breakaway leader endure cancer when she had spent her entire life serving patients and survivors.

All of us at NCCS, and the entire Breakaway family, will remember Kathryn for her relentless advocacy and unapologetic leadership. She will be missed greatly, and never forgotten.

“Kathryn was a true force of nature. It was such cruel irony that after decades of advocacy for cancer patients, she was diagnosed with cancer herself. I remember last year, during the Tour, she was on stage with other cancer survivors, and she had an emotional moment, realizing that she was now a member of the club no one wants to join. We are deeply grateful to Kathryn for her advocacy and will continue to advocate for patients in her honor.” – Shelley Fuld Nasso, NCCS CEO

“From the moment I met Kathryn at a Tour of California event, I knew she was someone I could learn from both professionally and personally. It was clear from seeing how she interacted with her staff, advocates, and even celebrities, that she could teach me about leadership and advocacy. Over the course of the week, I enjoyed getting to know Kathryn beyond the Breakaway leader and got to know how funny and compassionate a woman she was as well. I am so grateful to have known Kathryn, both before her diagnosis and after, and our time spent together at Breakaway will always be special to me.” — Kelsey Nepote, NCCS Advocacy Manager. Kathryn poses with Breakaway Ambassador Katherine Kelly Lang and a group of staff members from Breakaway from Cancer partner organizations.

Kathryn’s friends and colleagues shared their thoughts and remembrances on social media.

We lost a true warrior today to cancer. Kathryn West dedicated her life to the fight against cancer, leading Amgen’s Break Away From Cancer. She was an inspiration to many. I will miss her dearly. pic.twitter.com/peNyAyIPic

I am so sorry to say that our dear friend Kathryn West lost her fight to cancer today. She was the head of ⁦@BreakawayCancer⁩ and helped start the initiative. She was such an amazing, strong, inspirational, kind, dedicated woman. It’s a sad day. She will be missed 🙏🙌🏻💖 pic.twitter.com/mtCS8KtEnZ

I just learned of the passing of Kathryn West – who did so much for cancer survivors thru @BreakawayCancer In 2015 was honored to start a stage of the Tour of CA, and since that time Kathryn called me "family." Her strength and graciousness will be missed. #breakawayfromcancer

Such a gracious soul. RIP Kathryn West, you inspired so many and brought so much love to Earth during your time here. Godspeed.

We are deeply saddened to announce the passing of treasured colleague & friend, Kathryn West. Playing a pivotal role in the launch & success of Breakaway from Cancer®, she defined advocacy & community. We will miss her dearly. Kathryn is forever THE #breakawayfromcancer champion. pic.twitter.com/J8LLtSYA9U

So sadden to learn Kathryn West head of @BreakawayCancer lost her battle with cancer yesterday. She was an amazing, strong, giving woman who did so much for others. I was honored to have her as a friend and will miss her.

Another one gone too soon. We lost Kathryn West, who was a driving force for the Breakaway from Cancer program that Amgen built around the @AmgenTOC race. She battled cancer with tremendous courage, grace and her unique sense of humor. She will be greatly missed. RIP, Kathryn. https://t.co/L0Bu3sMX4H

And then there are the times that no amount of preparation is enough for this day. Kathryn West lost her three year battle with cancer last night. Kathryn was intelligent, beautiful, and courageous. Kathryn was inspirational to say the least. Kathryn changed my life. I have had the honor to work with her at @BreakawayCancer the last 5 years and have learned so much under her guidance. Kathryn was a key leader in developing and running the #breakawayfromcancer initiative that we have all come to know and love through it's activation at the @AmgenTOC and beyond. Kathryn was my mentor. You know those women who are confident and caring enough to invest in other women to grow and develop both personally and professionally? Yes. That was Kathryn. She gave me an incredible opportunity and then let me fly. Ok, maybe I didn't always fly right away. She would have to push me a bit to find the courage to take the leap. She had the biggest heart, and was especially gifted to offer a warm embrace and safe place for those that were affected by cancer. She was an independent and strong woman that wasn't afraid to be herself and show a softer side for those in need. She wasn't afraid to stand up for herself, and she taught me to find my own voice. She was fearless, even in the face of cancer. She was efficient and sassy. She bedazzled her #AmgenTOC swag, because normal polos and hats are boring. We were purse twins. Ok, she had it first, I copied her. Everyone loved stopping by her office not only for the bowl of candy, but also the welcoming frankness and guaranteed smile. Tonight I think I need a dirty martini and chicken wings in her honor. I will wear my red lipstick and heels with confidence. I will make sure I am always on time for conference calls with an appropriate agenda. I will find the humor in all situations, even if it is fighting a devastating disease. I will use a witty retort when necessary, and always have a hug available. I will help other women find their voice and confidence. I will be a better woman, professional, and person because of Kathryn West. I will be an advocate. May I be a fearless warrior like Kathryn West. May I change lives. 💔

August 3, 2022
NCCS hosted a webinar about the unique demands of caregiving in cancer and strategies that employers and health systems might engage…
END_OF_DOCUMENT_TOKEN_TO_BE_REPLACED
https://canceradvocacy.org/wp-content/uploads/Care-and-Career-Support-webinar-post-1200px.jpg 600 1200 NCCS Staff http://canceradvocacy.org/wp-content/uploads/2020/06/NCCA-Logo.png NCCS Staff2022-08-03 10:24:462022-08-03 10:24:46Webinar – Care and Career Support: From Health Systems to Employers