Both chambers of the Virginia Legislature moved a budget bill Wednesday that would expand Medicaid through the Affordable Care Act (ACA). The bill would make Virginia the 33rd state to expand Medicaid under Obamacare and could lead to as many as 400,000 people being newly covered. "As a doctor, I'm so proud of the significant step we've taken together to help Virginians get quality, affordable care," said Gov. Ralph Northam.

New Jersey Gov. Phil Murphy signed a law that requires all state residents to have health insurance or pay a penalty. Democratic legislators in the state had drafted the legislation after the ACA’s individual mandate penalty was removed as part of Congress' tax reform package. Experts predict ending the mandate would destabilize the health insurance market because it would be dominated by sick or older policy holders whose costs would drive up premiums.

President Trump earlier this week said that some pharmaceutical companies will announce in the coming weeks that they will voluntarily lower drug prices. Pres. Trump’s remarks came during a signing ceremony for the national Right to Try law: “Some of the big drug companies in two weeks…they are going to announce—because of what we did—they are going to announce voluntary massive drops in prices,” he said. HHS Secretary Alex Azar has encouraged drug companies to self-regulate their prices and has threatened to take action if companies aren't responsive.

The American Cancer Society this week announced a recommendation for colorectal cancer screening to begin at age 45 for those of average risk.  The ACS press release states:

An updated American Cancer Society guideline says colorectal cancer screening should begin at age 45 for people at average risk, based in part on data showing rates of colorectal cancer are increasing in young and middle-aged populations.

The new recommended starting age is based on colorectal cancer (CRC) incidence rates, results from microsimulation modeling that demonstrate a favorable benefit-to-burden balance of screening beginning at age 45, and the expectation that screening will perform similarly in adults ages 45 to 49 as it does in adults for whom screening is currently recommended (50 and older).

See the American Cancer Society website for the full text of the new recommendation, a recommendation summary chart, and other information. 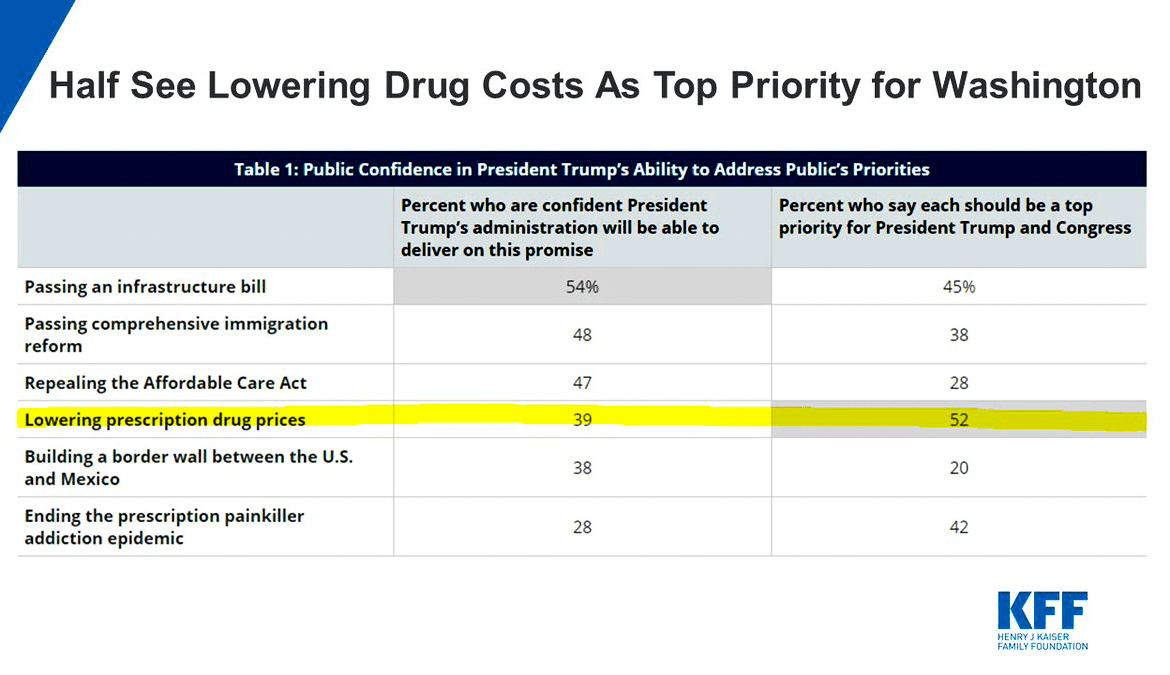 Poll: 52% of the public say bringing down Rx drug prices should be a top priority for Washington; 39% say they are confident President Trump will deliver

The March Kaiser Health Tracking Poll finds that more than a year into President Trump’s presidency, half of the public (52 percent) say passing legislation to bring down the price of prescription drugs should be a “top priority” for President Trump and Congress. Yet, less than half of the public (39 percent) say they are confident that President Trump and his administration will be able to deliver on the promise that Americans will pay less for prescription drugs than they pay now.

This article points out that more than 300 patient, consumer, and health care provider groups commented on the Trump administration’s proposed rule to expand the use of short-term health plans, and 95% of the comments criticized or opposed the proposal. Sandy Praeger, a former Republican state insurance regulator from Kansas, is quoted as saying, “Basically anybody who knows anything about healthcare is opposed to these proposals. It’s amazing.” NCCS submitted comments to the Centers for Medicare and Medicaid Services (CMS) in opposition to the proposed rule and hosted a webinar encouraging advocates to submit their own comments.
Read the LA Times article »

Why Your Health Insurer Doesn’t Care About Your Big Bills

In this eye-opening piece, ProPublica and NPR examine the “bewildering, sometimes enraging ways the health insurance industry works, by taking an inside look at the games, deals and incentives that often result in higher costs, delays in care or denials of treatment.” Read More »

This piece describes new “copay accumulator” programs that limit the protections copay assistance programs provide to consumers with expensive cost-sharing. “Drug copay assistance programs have long been controversial. Proponents say that in an age of increasingly high deductibles and coinsurance charges, such help is the only way some patients can afford crucial medications. But opponents say the programs increase drug spending on expensive brand-name drugs by discouraging people from using more cost-effective alternatives.” Read More »

November 1, 2022
Amanda Helms was enjoying a bubble bath while reading a book when she looked down and noticed a lump on the side of her breast in January…
END_OF_DOCUMENT_TOKEN_TO_BE_REPLACED
https://canceradvocacy.org/wp-content/uploads/Amanda-Helms-Advocate-Spotlight-webmc.jpg 600 1200 NCCS Staff https://canceradvocacy.org/wp-content/uploads/2020/06/NCCA-Logo.png NCCS Staff2022-11-01 13:57:522022-11-10 15:01:05Amanda Helms: Care Planning, Mental Health, and Palliative Care are Essential to Quality Cancer Care

NCCS Statement on the Passage of the STAR Childhood Cancer Act and the Right...