On January 3, a coalition of 20 Democratic Attorneys General filed a legal brief requesting that the Supreme Court immediately take up a challenge to the ACA, calling on the justices to decide the law’s fate on an expedited basis, before the presidential election in November.

NCCS joined with 24 patient groups in a statement endorsing the expedited Supreme Court review of the ACA case. View the statement »

In mid-December, the Trump Administration announced a plan to allow the importation of prescription drugs from Canada in an effort to reduce the cost of these medications.

Health policy experts are unconvinced that this strategy will help lower drug costs, or that it is even possible. Kaiser Health News reports that the plan is unlikely to work because Canada doesn't produce enough drugs, nor does it seem to be on board with exporting the ones it does have to America. Beyond that, experts say the president's plan will have little to no impact on what consumers pay for drugs. Politico outlines why importation is not the answer.

The American Cancer Society released their annual Cancer Statistics report. The study found overall cancer mortality dropped 2.2% from 2016 to 2017—the largest drop ever recorded in one year—thanks in large part to improvements in certain lung cancer and melanoma treatments. However, progress against other cancers has slowed, mainly due to obesity and persistent economic, geographic, and racial disparities in cancer care.

Read the story on NPR » 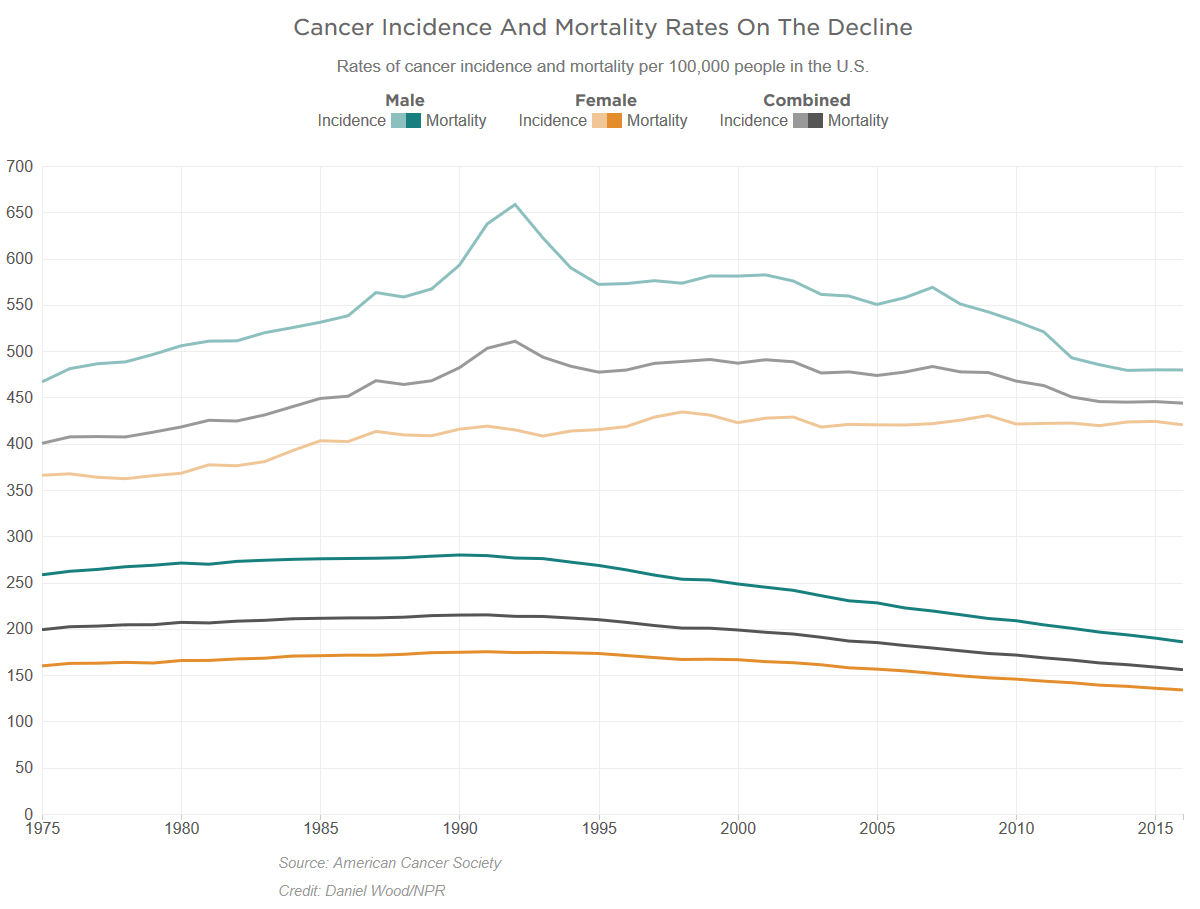 Immunotherapy is showing such a dramatic impact in the treatment of locally advanced and advanced non-small cell lung cancer that this effect elevates the statistics for all lung cancer and—this I find astonishing—you can even see its effect in age-adjusted cancer mortality overall.

A.I. Comes to the Operating Room

Brain surgeons are using artificial intelligence (AI) to diagnose tumors accurately and much faster, according to a report in the journal Nature Medicine. "The new approach streamlines the standard practice of analyzing tissue samples while the patient is still on the operating table, to help guide brain surgery and later treatment."

It was easy for the hospital physician to call a neurosurgeon and neuro-oncologist and for them to assess my father early on a Sunday morning before I arrived. But when I asked if we could get my father a palliative-care consult on Sunday, the answer was a definitive no. All we got was the number of the hospital’s palliative-care service; we had to call the next day, during normal business hours, to arrange a future consultation.

The expansion would make more than 100,000 Kansans eligible for health coverage through Medicaid. The plan does not include work requirements, but it does mandate a $25 a month premium for new enrollees—a detail that will require approval from federal regulators. Gov. Kelly’s goal is to pass the plan through the legislature this year so that new enrollees can begin coverage in January 2021.

WHAT WE’RE LISTENING TO

A renewed focus on health care in 2020

Julie Rovner of Kaiser Health News was interviewed by “Detroit Today” about how health care is playing out in the 2020 presidential campaign and concerns over changes brought by the ACA. The conversation included focusing on rising health plan deductibles, Democratic candidates’ battle over a “Medicare for All” plan and the growing concerns about surprise medical bills.

January 12, 2023
As a Triple Negative Breast Cancer survivor, Sharon turned her personal experience into a passion for advocacy and giving back to the community. When she received her diagnosis in May 2015, she remembers being in a state of shock and grief. She said, “You have to allow yourself time to breathe and grieve.”
END_OF_DOCUMENT_TOKEN_TO_BE_REPLACED
https://canceradvocacy.org/wp-content/uploads/Advocate-Spotlight-Sharon-Rivera-Sanchez.jpg 600 1200 NCCS Staff https://canceradvocacy.org/wp-content/uploads/2020/06/NCCA-Logo.png NCCS Staff2023-01-12 15:24:442023-01-12 15:24:44Sharon Rivera-Sanchez: Triple Negative Breast Cancer Survivor Finds Passion in Fitness and Advocacy

December 7, 2022
Alique was first diagnosed with Acute Myeloid Leukemia (AML) at the age of four. Her mother, Michele, knew something was wrong because “the light in her eyes was gone”. After being told by doctors that there was nothing wrong, her family was relentless until new blood work uncovered blast cells.
END_OF_DOCUMENT_TOKEN_TO_BE_REPLACED
https://canceradvocacy.org/wp-content/uploads/Alique-Topalian-Advocate-Spotlight.jpg 600 1200 NCCS Staff https://canceradvocacy.org/wp-content/uploads/2020/06/NCCA-Logo.png NCCS Staff2022-12-07 11:46:562022-12-07 11:48:28Alique Topalian: Childhood Cancer and the Frightening Realities of the Survivorship Journey