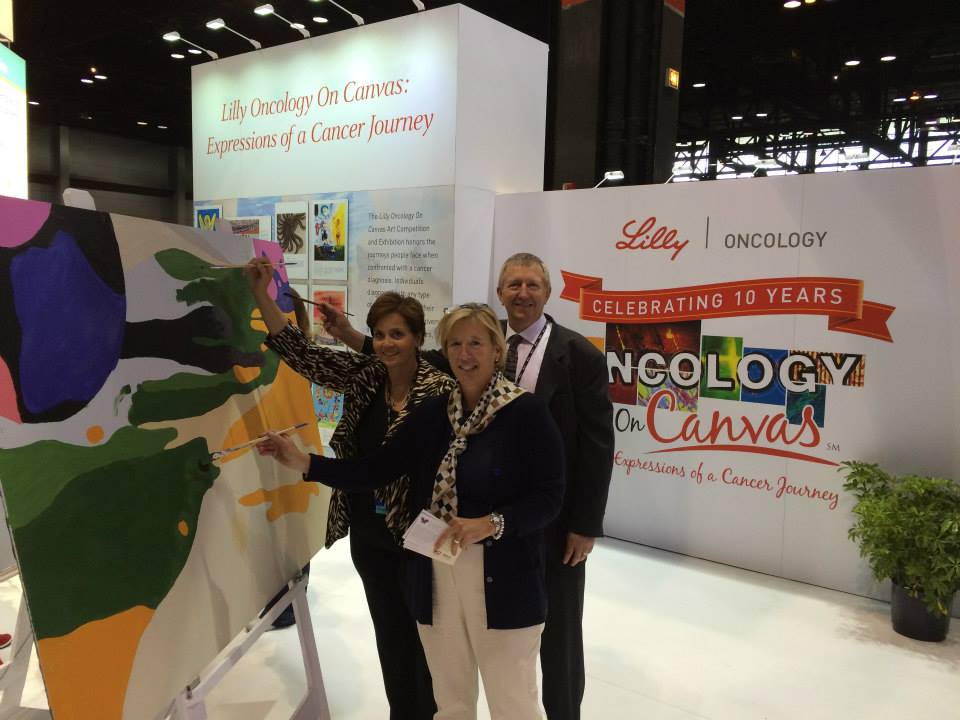 I am happy to be back in the office, after spending five days in Chicago at the American Society of Clinical Oncology (ASCO) Annual Meeting. It was ASCO’s 50th anniversary, and this year was the highest attendance, with 33,000 people from around the globe. It’s an exciting and exhausting five days, with scientific sessions that presented both positive and negative results of clinical trials that will inform current clinical practice and future research. Additionally, there were educational sessions about policy issues of interest to NCCS, including changes in the way physicians are paid, value in cancer care, and survivorship programs in both the academic and community settings.

Attending ASCO can be an overwhelming experience. The venue is huge, and the amount of information shared is incredible. I enjoyed the posts of a patient named T.J. Sharpe, who has Stage IV Melanoma and attended ASCO to learn about some of the advances in melanoma presented at the meeting. He shared his experiences in a series of posts on the Patient #1 blog on Philly.com. T.J. talks about the “one-upmanship” of the industry booths on the exhibit floor, but we found one booth to be truly inspiring. The Lilly Oncology On Canvas Hope Murals Project brought oncology professionals together to participate in a mural using a “paint-by-number” process, recreating a caregiver’s artistic interpretation of her sister’s journey with lung cancer, and creating a permanent tribute to and show of support for those touched by cancer.

Attendees were tweeting in full force, and it was possible to sit in one session and follow another session on Twitter, with the hashtag #ASCO14. Some tweeters were not at the meeting, but were following the reports and reactions of attendees from their homes around the globe. There were even official and unofficial “tweetup” get-togethers. It’s amazing how Twitter has transformed attendance at and communications about major meetings like this one, including the ability for patient advocates to participate in real time. Here’s a discussion of several oncologists about why they tweet, what they tweet about, and how they use Twitter to communicate with their peers and with patients and even to help recruit for clinical trials.

Value was a topic of a number of sessions. Diane Blum, a longtime advocate and former head of both CancerCare and the Lymphoma Research Foundation, did an excellent job discussing patient perspectives on value and the importance of shared decision-making, so that patients’ values can be included in decisions about treatment. She also talked about the need for decision aids to help in the discussion between physicians and patients.

Dr. Len Lichtenfeld, Deputy Chief Medical Officer for the American Cancer Society, shared an overview about the value discussions, including what a change it is to be talking about value, which was previously an unspoken topic. He laid out some of the perspectives of pharmaceutical companies, payers, and patients, and asks, “Here we sit, but is it on the edge of a precipice or the edge of an opportunity? Who will take the lead? Who will truly define value? Who will afford the costs?” The discussion will be continued at a workshop hosted by the Institute of Medicine (IOM) next Monday, where I am pleased to be providing a patient perspective.

May 20, 2022
Last week, NCCS hosted a conversation with cancer control expert and epidemiologist Otis Brawley, MD. NCCS CEO Shelley Fuld Nasso moderated the discussion. “We knew exactly who we wanted to be our first guest speaker in this series. Dr. Otis Brawley is a Bloomberg Distinguished Professor at Johns Hopkins University, an oncologist and an epidemiologist. [...]
END_OF_DOCUMENT_TOKEN_TO_BE_REPLACED
https://canceradvocacy.org/wp-content/uploads/Beyond-the-Checkbox-Crystal-Labbato.jpg 600 1200 NCCS Staff https://canceradvocacy.org/wp-content/uploads/2020/06/NCCA-Logo.png NCCS Staff2022-05-20 13:39:272022-05-20 13:39:27Webinar – Beyond the Checkbox: Delivering Meaningful Cancer Survivorship Care in a Community Setting

Focus on the Care Video: Palliative Care and Living Well with Cancer