This week, NCCS joined the American Cancer Society Cancer Action Network in a campaign against proposed Medicare Part D changes. More than 50 groups joined the campaign in opposition to the administration’s proposal to change Medicare Part D's protected classes drug coverage, which would give Medicare plans the option to limit coverage of drugs in six categories, including cancer drugs.

The government shutdown continues, but Congress is in session and other legislative priorities continue to move forward. Committee assignments continue to roll out this week as Rep. Lloyd Doggett (TX-35) was named as health subcommittee chair on Ways and Means. His position on the committee will make him an important player in all health care matters in 2019. Rep. Anna Eshoo (CA-18) was confirmed as the health subcommittee chair of the Energy and Commerce Committee.  Meanwhile, on the Senate side, Republican Members on the Finance committee met to discuss drug pricing with HHS Secretary, Alex Azar. Reporting indicates that GOP members remain split on drug proposals and how best to move forward.

Compare Democrats' many Medicare-for-All proposals with this chart

Medicare-for-All and other proposals to expand health coverage will be getting a lot of attention in the 116th Congress. Check out the chart below created by PBS that shows what each proposal would do. 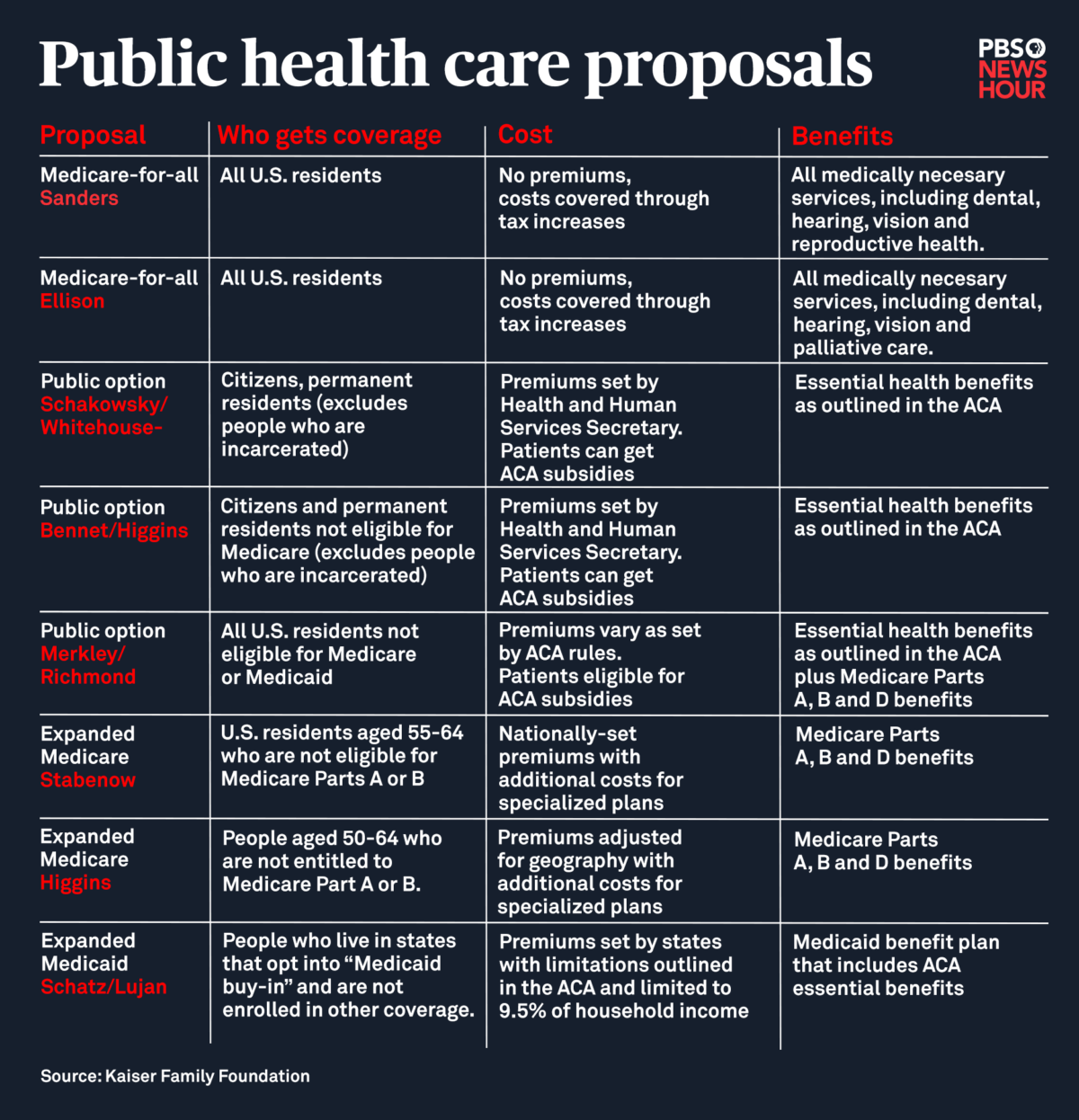 The Center for Budget and Policy Priorities released an analysis on Arkansas's work requirement policy for certain Medicaid beneficiaries, saying the “CBPP report concludes that Medicaid work requirements are inherently flawed and ‘can't be fixed.’" This comes just a few days after updated numbers were released in Arkansas that show 18,164 low-income people were “kicked off the government-funded insurance program due to work rule noncompliance in 2018.”

Suicide risk 4 times worse for cancer patients, study finds — What clinicians can do to help

A study from Penn State College of Medicine provides new insights into suicide rates of cancer patients.  In addition to the headline, the article also points this is a “two-fold increase from a similar 2002 study.”

Can States Fix the Disaster of American Health Care?

Bold health initiatives proposed by officials in California, Washington and other states could create blueprints to follow. Elizabeth Rosenthal argues that states have a solid track record when it comes to being good examples for experimentation, such as when Massachusetts introduced “Romneycare” in 2006, which was the blueprint for the Affordable Care Act.

The article highlights that "the study, which was published in the journal Cancer Causes & Control, found that people who exercised regularly as a lifestyle — both before and after diagnosis — experienced a 39% reduced risk of mortality compared with patients who were inactive as a lifestyle."

A Cancer Rap, With Thanks to Nina Simone

This week, in the New York Times' “Living With Cancer” section, a cancer survivor writes how after many cancer-related setbacks, she started singing along to Nina Simone.

May 20, 2022
Last week, NCCS hosted a conversation with cancer control expert and epidemiologist Otis Brawley, MD. NCCS CEO Shelley Fuld Nasso moderated the discussion. “We knew exactly who we wanted to be our first guest speaker in this series. Dr. Otis Brawley is a Bloomberg Distinguished Professor at Johns Hopkins University, an oncologist and an epidemiologist. [...]
END_OF_DOCUMENT_TOKEN_TO_BE_REPLACED
https://canceradvocacy.org/wp-content/uploads/Beyond-the-Checkbox-Crystal-Labbato.jpg 600 1200 NCCS Staff https://canceradvocacy.org/wp-content/uploads/2020/06/NCCA-Logo.png NCCS Staff2022-05-20 13:39:272022-05-20 13:39:27Webinar – Beyond the Checkbox: Delivering Meaningful Cancer Survivorship Care in a Community Setting

NCCS Webinar Video: “The Outlook for Health Care in the New Congress&...