This week proved to be another busy week in health care. NCCS led a team with representatives from other cancer patient advocacy groups to attend meetings with Senators to encourage them to support the Alexander-Murray bipartisan stabilization bill.

The Alexander-Murray bill would fund cost-sharing reduction (CSR) payments through 2019 and restore $106 million of the funding for enrollment outreach over the same time period. In exchange for these stabilization policies, states will have more flexibility to shape their own health care systems. As Vox explains, states would have to jump through fewer hoops for ACA waivers and approvals would be streamlined. The bill allows state flexibility regarding waivers, but retains critical patient protections, as states would not be allowed to waive essential health benefits or discriminate based on pre-existing conditions.

The non-partisan Congressional Budget Office (CBO) released its analysis of the impacts of the Alexander-Murray bill and the results were positive. The CBO said the bill could cut the U.S. deficit by $3.8 billion over the next decade. The CBO estimates that health insurance premiums likely wouldn’t change much, but neither would the bill drastically reduce the number of citizens covered under Obamacare. However, when looking at the CBO report, it is critical to remember that CBO was instructed to assume the CSR payments would continue when doing their analysis. We now know that is in fact not the case, so the true deficit reduction of Alexander-Murray is likely much higher than outlined by the CBO report.

While there are currently 24 co-sponsors of the Alexander-Murray bill, 12 Republican and 12 Democrat, not all Members are committed to a bipartisan approach to health care. This week, Senator Orrin Hatch (R-UT) and Congressman Kevin Brady (R-TX) introduced their own proposal that would also fund CSR payments. However, this “stabilization effort” of funding the CSR payments is offset by repealing the individual and employer mandate, which experts have said would destabilize the ACA marketplace. Not only does this proposal undermine productive bipartisan efforts to stabilize the health care market place, but it would hurt cancer patients who rely on a robust risk pool supported by these mandates.

The Alexander-Murray agreement is an important step forward in moving Congress toward bipartisan action on health care and away from damaging efforts to repeal the ACA and taking coverage away from millions of people. The bill rebukes the Administration’s efforts to undermine the ACA and would help to stabilize the marketplace.

Please contact your Members of Congress and ask them to support the Alexander-Murray bipartisan stabilization bill by calling our hotline at (844) 257-6227. 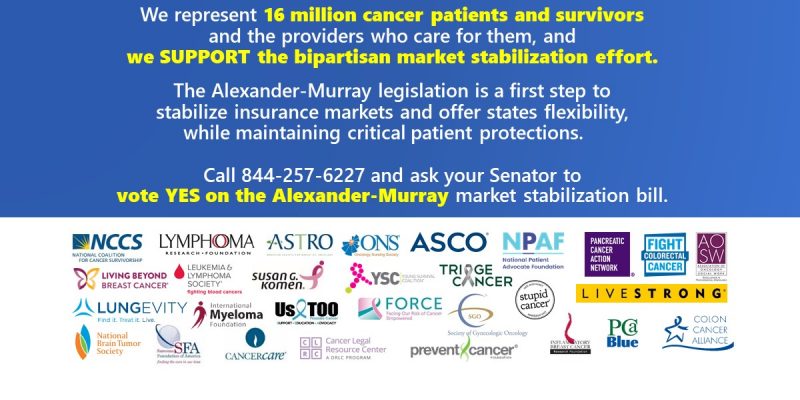