Prior to the Affordable Care Act (ACA), cancer survivors were at the mercy of the health care system, often forced to pay exorbitant premiums or simply denied coverage altogether. Today, America’s 16 million cancer survivors benefit from the ACA’s patient protections that are critical to providing them with quality, affordable, and accessible health care coverage. NCCS is actively engaged in advocating to ensure this unprecedented access for cancer patients and providers continues.
The tax bill has officially turned into a health care bill.

But the tax bill gets worse for cancer patients and survivors. The Senate Finance Committee included the repeal of the individual mandate this week. Throughout the year, NCCS has stressed the importance of the mandate as it is the lynchpin for patient protections. An insurance system without patient protections would be devastating for cancer patients who rely on access to quality and affordable health care. The Congressional Budget Office (CBO) estimates that if the individual mandate is repealed, 13 million Americans would be left without health coverage and premiums would rise by 10%. But Congressional Republicans are looking for ways to offset tax cuts and taking health care away from 13 million people would save more than $300 billion.

“The individual mandate is a central tenet of Obamacare that health policy experts and proponents say is essential to making the law work. It compels young and healthy people to join health insurance markets and help lower premiums by offsetting the costs of sicker patients,” reports Business Insider. NCCS is also concerned that passage of tax legislation that increases deficits by $1.5 trillion would trigger sequestration. This means that cuts of $25 billion in 2018 to Medicare would be automatic and would hurt cancer patients who rely on Medicare.

Tax reform should not come at the expense of those living with cancer. NCCS joined 29 organizations in a campaign to oppose the repeal of the individual mandate and protect cancer patients’ access to quality and affordable health care. This legislation is moving quickly, so Congress needs to hear from you NOW.

The House voted Thursday afternoon to pass its bill, and the Senate is scheduled to vote soon after Thanksgiving break. Call your Senators today using our hotline at (844) 257-6227 and ask them to stand up for cancer patients by opposing the individual mandate repeal in the tax legislation. 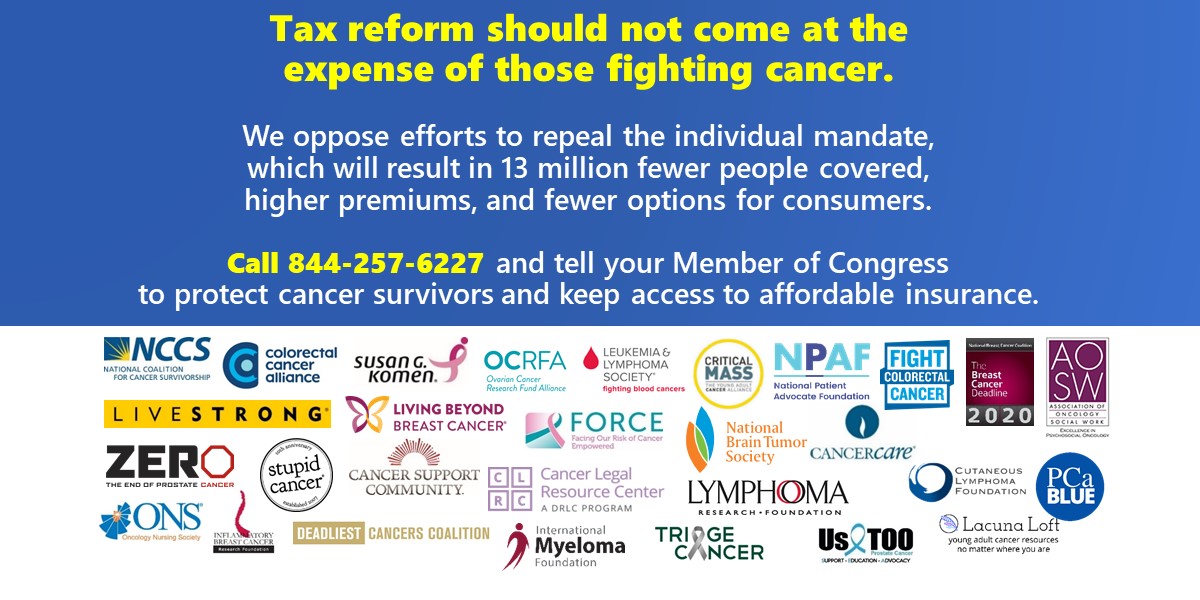 November 1, 2022
Amanda Helms was enjoying a bubble bath while reading a book when she looked down and noticed a lump on the side of her breast in January…
END_OF_DOCUMENT_TOKEN_TO_BE_REPLACED
https://canceradvocacy.org/wp-content/uploads/Amanda-Helms-Advocate-Spotlight-webmc.jpg 600 1200 NCCS Staff https://canceradvocacy.org/wp-content/uploads/2020/06/NCCA-Logo.png NCCS Staff2022-11-01 13:57:522022-11-10 15:01:05Amanda Helms: Care Planning, Mental Health, and Palliative Care are Essential to Quality Cancer Care